Vassilis Kikilias: Tourism is an area where Greece and Turkey can cooperate 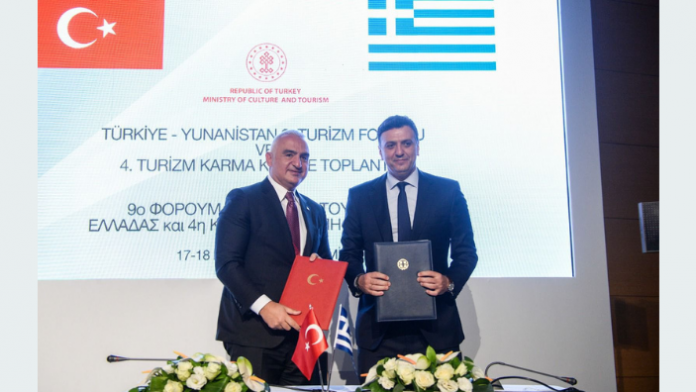 Greek Tourism Minister, Vassilis Kikilias, arrived in the Turkish city of Izmir on Tuesday, heading the Greek delegation to the 4th Session of the Joint Tourism Committee and the 9th Greek-Turkish Forum on Tourism.

The last meeting of the Joint Tourism Committee and the Forum on Tourism had taken place in Athens in October 2011.

During the meeting, Kikilias stressed that the tourism sector was one in which Turkey and Greece could cooperate.

“We live in sensitive times, which are occasionally difficult, but we must all agree that tourism and travel is the framework in which we can and shall be able to work together even better and cooperate,” the Tourism Minister said in his address.

Kikilias also welcomed the fact that the joint committee and forum were meeting again in a constructive way after 10 years and said that Greece’s goal was to increase the number of cities and islands that are linked by ferries.

“If I had to prioritise our goals based on the pandemic and respect for health and hygiene protocols… it would be to reduce bureaucracy and facilitate travel from Turkey to Greece but also from Greece to Turkey,” he said.

The Tourism Minister also added that visitors from Turkey were “welcome, quality tourists” and that Greece wanted to increase the tourist flow from Turkey.

In response, Turkey’s Culture and Tourism Minister, Mehmet Nuri Ersoy, referred to the importance of developing cooperation between the two countries in the tourism sector and the benefits this will bring for their relations.

Ersoy also stressed the significance of a temporary visa and how useful this will be for Turkish travellers to the Greek islands.

The meeting ended with the signing of a memorandum of cooperation in tourism issues between the two countries.