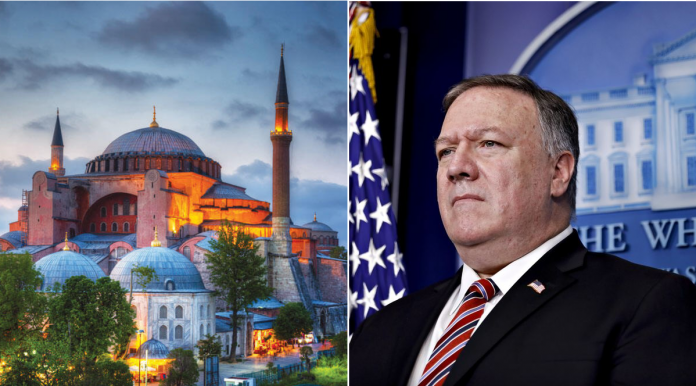 US Secretary of State, Mike Pompeo, has urged Turkey to let the former Byzantine cathedral of Hagia Sophia remain a museum, a day before a court ruling could pave the way for it to be turned back into a mosque.

In the statement, Pompeo praised the Turkish government for maintaining the building “in an outstanding manner” as a museum, but said a change in its status would diminish its legacy.

“We urge the Government of Turkey to continue to maintain Hagia Sophia as a museum, as an exemplar of its commitment to respect the faith traditions and diverse history that contributed to the Republic of Turkey, and to ensure it remains accessible to all,” Pompeo said.

“The United States views a change in the status of the Hagia Sophia as diminishing the legacy of this remarkable building and its unsurpassed ability… to serve humanity as a much-needed bridge between those of differing faith traditions and cultures.”

Pompeo added that the United States also seeks to continue working with the Government of Turkey “on a broad range of issues of mutual interest, including the preservation of religious and cultural sites.”

In response, Turkey’s Foreign Ministry spokesman, Hami Aksoy, said the government was “shocked at the statement.”

“Hagia Sophia, situated on our land, is the property of Turkey like all our cultural assets,” Mr Aksoy said.

“Naturally everyone is free to express their own opinion. However, it is not for anyone to talk about our sovereign rights in the style of ‘we urge, we demand’.”

Hagia Sophia, a UNESCO World Heritage Site, is one of Turkey’s most visited monuments.

Finished in the year 537 with futuristic building techniques in what was then Constantinople, it was the main cathedral in Christendom for 900 years before becoming an Ottoman mosque in 1453.

It was converted into a museum in 1934 under the secular founder of the modern Turkish republic, Kemal Ataturk, but the July 2 case before the court challenges the legality of this step.