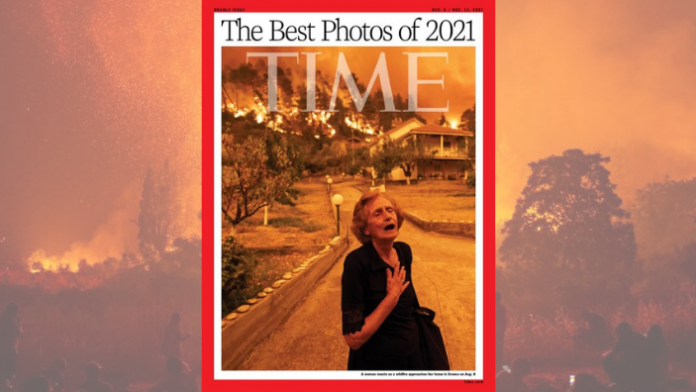 A moving photo of 81-year-old Panayiota Noumidi taken during the fires that devastated the Greek island of Evia this year has been named among TIME Magazine‘s ‘Top 100 Photos of 2021.’

Taken by Konstantinos Tsakalidis, the photo encapsulates the horror and fear that struck residents of Evia and other parts of Greece in August as fire destroyed forests and villages.

Speaking to Star.gr back in August, Panayiota said she lost sight of her husband in the flames moments before the iconic image was taken.

“At the moment of the photo, the flames were coming towards us and my husband ran with the bucket to throw water behind our house where the fire was. I lost sight of him and cried, ‘help, help!’,” Panayiota said.

READ MORE: ‘I lost sight of my husband’: Greek woman shares the fear behind heartbreaking photo.

Panayiota was later reunited with her husband and taken to a hospital for treatment, but was discharged because she wanted to return to Gouves, her home of 34 years, and inspect the damage. Her home was saved.

The photo joins a number of other iconic images on the list including the moment George Floyd’s family cheered a jury’s verdict into his death, the time the Taliban walked into Kabul then knelt in prayer, and also the time where National Guardsmen slept in the US Capitol.