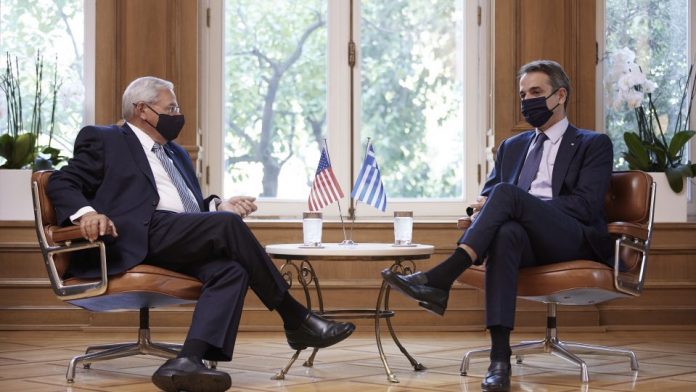 Chair of the US Senate Foreign Relations Committee, Bob Menendez, flew into Athens on Thursday.

The US Senator met with Prime Minister Kyriakos Mitsotakis where they discussed developments, the crisis in Afghanistan, as well as the relations and defense cooperation between the two countries.

“We are really looking forward to the completion of the US-Greece Defence Partnership Act of 2021, which I believe will be a milestone legislation that will further cement the progress we have made in our bilateral relations,” Mitsotakis said during the meeting.

“We discussed our common goal for stability in the Eastern Mediterranean and I expressed that we look forward to the completion of the US-Greece Defense & Interparliamentary Partnership Act, a milestone that will further cement the progress we have made in our bilateral relations,” he went on to write on his Twitter account.

Menendez later attended the ‘Greece 2021’ Committee event at the Acropolis Museum and told an audience that he has and “will stand by Greece through all times”.

“Greece is on the cusp of a great and exciting future,” he said.

“We have come so far in such a short time … and there are no limits to what we can do together.”