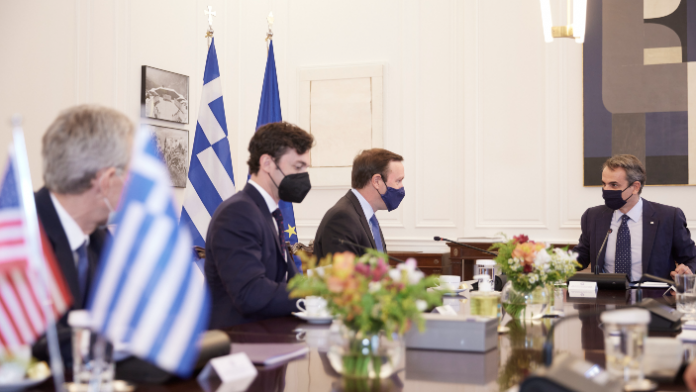 Regional and international issues of mutual interest, particularly in the Eastern Mediterranean, Middle East and Afghanistan, were discussed during a meeting between Prime Minister, Kyriakos Mitsotakis, and visiting US Senators, Chris Murphy and Jon Ossoff, on Monday.

Greeting the two senators, Mitsotakis commented that relations between Greece and the United States were “going from strength to strength on all fronts: security, defense, geopolitics and economics.”

According to government sources, the meeting reaffirmed the excellent level of bilateral relations between Athens and Washington.

Mitsotakis and the two Senators also explored the possibilities for their further deepening and expansion in areas such as defense cooperation, investments in strategic infrastructure and cooperation in energy and the environment.

They also discussed the government’s planned reforms of the Greek state and economy.

Mitsotakis outlined the recent developments in the Eastern Mediterranean and analysed Greece’s role as a pillar of stability and security in the wider region, via cooperation schemes with joint partners, such as Cyprus, Israel and Egypt. Regarding Afghanistan, the prime minister stressed that those fleeing the country should stay as close to their homes as possible.

The meeting also addressed the progress of the US-Greece Defense and Interparliamentary Partnership Act that is currently in Congress, which will strengthen Greek-US cooperation even further. It also examined the changes in the US-Greece Mutual Defense Cooperation Agreement that are currently being negotiated.

Participants in the meeting on the Greek side include Deputy Foreign Affairs Minister for Economic Diplomacy Kostas Fragogiannis, the head of the PM’s diplomatic office Ambassador Eleni Sourani, deputy government spokesperson Aristotelia Peloni and the head of the PM’s Economic Office Alexis Patelis. It was also attended by US Ambassador in Athens Geoffrey Pyatt.

The Senators met with Greek Foreign Minister, Nikos Dendias, earlier on Monday and also discussed further strengthening strategic relationships between both countries. Dendias is due to visit Washington in the coming months.