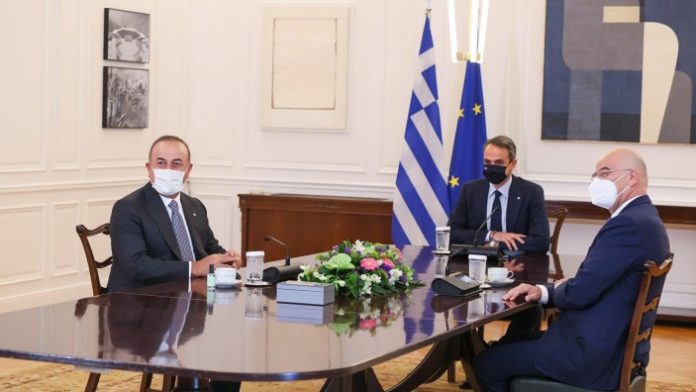 The leaders of Greece and Turkey will meet next month on the sidelines of a NATO summit, the two countries’ foreign ministers agreed on Monday, as they seek to mend frayed ties that led to a sharp escalation in tension last year.

In brief statements in Athens, the ministers said their talks were an opportunity to agree on a meeting between Turkish President, Recep Tayyip Erdogan, and Greek Prime Minister, Kyriakos Mitsotakis, at the NATO summit in Brussels on June 14.

“We are fully aware of the different, and in quite a few particularly serious issues, of the diametrically opposed positions that we espouse, I mean we and Turkey,” Greece’s Nikos Dendias said, noting he and his Turkish counterpart, Mevlut Cavusoglu, had discussed the full range of Greek-Turkish and Turkish-European Union relations.

“The aim of our meeting today was to attempt a process of initial consultation and if this proves possible, a gradual normalisation of the situation over time,” Dendias said.

The ministers’ joint appearance had none of the tension of their previous meeting in April, when Dendias visited Ankara and a press conference there featured a trading of barbs as each listed his country’s grievances with the other.

“We have issues that have been awaiting resolution for a long time. We have differences of opinion,” Cavusoglu said. “We want all of these issues and differences of opinion to be resolved with a foundation of neighbourliness, international law and a respect for mutual rights and interests. And for this reason, our dialogue must continue uninterrupted. On this subject both sides are willing, we’ve reestablished that today.”

Cavusoglu said the two sides were working “on concrete projects focused on action and cooperation,” and that they had agreed on 25 items and were working on a broad area of cooperation ”from transportation to energy, from tourism to environment to commerce.”

Dendias said a “limited list of economic cooperation programs” was agreed upon, but provided no details.

The statements were carried live by state television, and there were no questions as reporters were not allowed to attend, with the Foreign Ministry citing COVID-19 concerns.

Greece and Turkey have been divided for decades over a series of disputes, including territorial rights in the Aegean. Last summer, tension rose dramatically, with disagreements over maritime boundaries and energy exploration rights in the eastern Mediterranean leading to a face-off between warships from the two countries.

Cavusoglu preceded his official trip to Athens with a private visit on Sunday to Thrace in northeastern Greece, home to the country’s Muslim minority.

Referring to the minority as Turkish is diplomatically sensitive and highly contentious in Greece, which recognises the minority only as a Muslim one and notes it includes Roma and Pomak communities.

Greek Foreign Ministry spokesman, Alexandros Papaioannou, responded on Sunday that Greece “steadily adheres to international law and the protection of human rights. It fully implements the obligations stemming from the Treaty of Lausanne, which explicitly and clearly refers to a Muslim minority in Thrace.”

He said that “Turkey’s constant attempts to distort this reality, as well as the allegations of supposed non-protection of the rights of these citizens, or of alleged discrimination, are unfounded and are rejected in their entirety.”

The 1923 Lausanne treaty handled the exchange of populations between Greece and Turkey in the aftermath of war, uprooting around 2 million people: approximately 1.5 million Orthodox Christians living in Turkey and half a million Muslims living in Greece.

The Muslim community in Thrace and the Greek community of Istanbul were exempt. However, the Greek minority in Istanbul has dwindled to a fraction of the estimated 200,000 people, with many fleeing persecution in the 1950s.