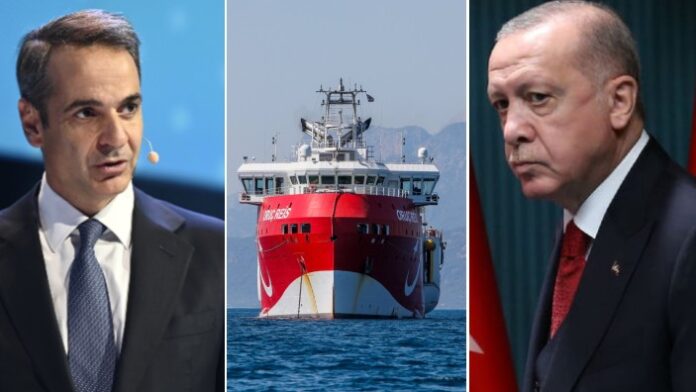 In less than 48 hours after the devastating earthquake that hit Turkey and the Greek island of Samos, Ankara has extended its seismic search activities inside the Greek continental shelf.

The Turkish navy said on Sunday in a message on the international maritime alert system, NAVTEX, that the Oruc Reis vessel would stay in the eastern Mediterranean for seismic investigations until November 14, extending its activities from the previously announced end date of November 4.

However, Athens soon responded to the Turkish move, denouncing what it described as “Turkey’s illegal conduct,” and demanding that it withdraw from the area.

The Greek foreign ministry said in a tweet that Foreign Minister Nikos Dendias will inform the country’s allies and partners of the latest developments.

“This (Turkish) action only increases tensions in a vulnerable region where attention is currently focused on aid and support and solidarity (after the earthquake),” the foreign ministry said.

This morning, the Turkish Foreign Ministry had its own response to Greece’s criticism, saying continuous objections to Turkey’s survey activities are “in vain.”

“Turkey will continue its activities in the region within the framework of its rights, based on international law,” Hami Aksoy, the spokesperson for the Foreign Ministry, said in a statement.

Aksoy urged that instead of blaming Turkey with unfounded allegations and complaining to a third party, Greece should contribute to negotiations in an effort to ease increasing tensions between the neighbours.

“We once again invite Greece to an unconditional dialogue with our country to address both the Eastern Mediterranean maritime jurisdiction issue and other interrelated issues between the two countries,” Aksoy said.

The Ministry also said on Sunday that two other vessels, the Ataman and Cengiz Han, will accompany the Oruc Reis during its activities in the Eastern Mediterranean.

It will conduct various geological, geophysical, hydrographic and oceanographic surveys, particularly of the continental shelf, while also searching for natural resources.

For now, it seems the words of friendship and good neighbourly relations between the two countries seem to be over as Turkey continues its provocative acts in the Aegean.