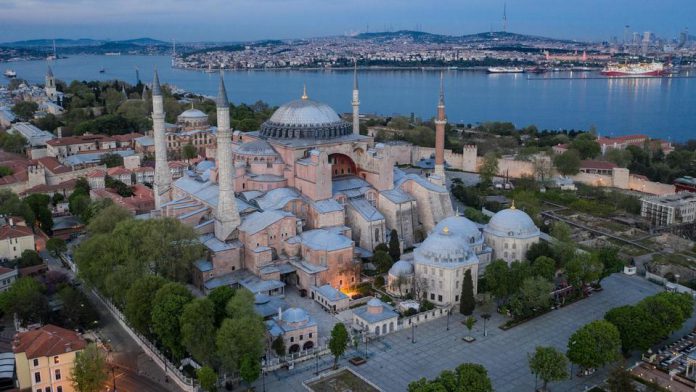 The Greek government has condemned Turkey’s “fiestas”, organised by Turkish President Recep Tayyip Erdogan, outside of Hagia Sophia on Friday on the anniversary of the Fall of Constantinople.

The fiesta took place in Istanbul last night outside the former church and patriarchal cathedral of Greek Orthodoxy, the Hagia Sophia, a museum since 1932.

“The fiesta that Ankara is preparing in Hagia Sophia is disturbing and is a matter of denouncement because, among other things, it has been designated a museum of world cultural heritage and is currently being used to promote other purposes,” Petsas said on Friday, speaking to Greek broadcaster SKAI.

Petsas pointed out that this was not the first time that something along these lines was happening at the historic church.

“We are monitoring any provocation but we always promote good neighbourly relations, in accordance with international law,” he said.

Turkish President Recep Tayyip Erdogan announced on Thursday that mosques will re-open for worshipers on Friday and a big collective prayer would be held outside the Hagia Sofia.

Last year, Erdogan announced his intention to covert Hagia Sophia into a mosque. The Turkish President has so far refrained from doing so, being warned by UNESCO of the consequences for the Turkish cultural and scientific community.