Eight International Summer University to be held in Kastellorizo 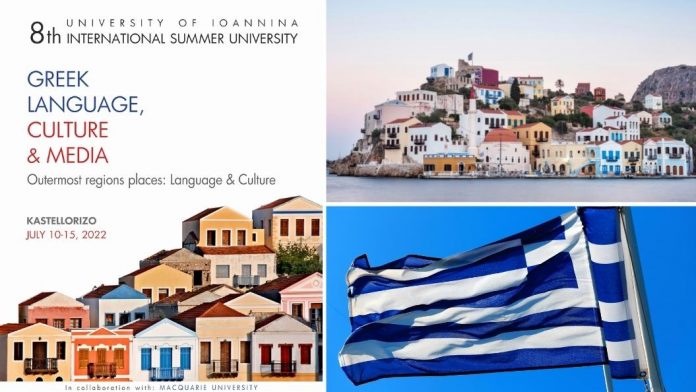 The University of Ioannina – School of Education, Department of Early Childhood Education, and the Department’s Social Issues, Mass Media, and Education Studies Laboratory, in cooperation with:

-the Modern Greek Studies Program of the Department of Media, Communications, Creative Arts, Language and Literature, Faculty of Arts, Macquarie University, and
-the Macquarie Greek Studies Foundation, in Sydney, Australia,
with the participation of:
-The Circle of Hellenic Academics in Boston, and
-the Boston University Philhellenes in Boston,

Organizes the 8th International Summer University “Greek Language, Culture, and Media”. The project is scheduled to take place in Kastellorizo on July 10 – 15, 2022, at the Hall for Cultural Events of the island.

The program enjoys the auspices and the support of the General for Greeks Abroad and Public Diplomacy of the Ministry of Foreign Affairs, as well as the auspices of the Municipality of Megisti.

The organization is planned, with the careful consideration of all the current sanitary measures against the pandemic, which it monitors and follows strictly.

ERT, ERT 2, ERT3, ERT WORLD, Proto Program 105.8, and the Voice of Greece, together with the Channel of the Parliament, have supported the project as media sponsors from the very beginning. CNN GREECE, the newspaper The Greek Herald/Ελληνικός Κήρυκας in Sydney, the newspaper Neos Kosmos in Melbourne, and the radio station 2mm Radio 1665, Sydney, Darwin, Wollongong also serve as media sponsors. The project is also supported by a series of other institutions, which will announced soon.

After seven years of renowned success for the organization, the “tradition” of cultivating extroversion and synergies with prominent international institutions of education, culture, and media continues. It is reminded that, in the past, the International Summer University “Greek Language, Culture, and Media” has been also supported by the Center for Hellenic Studies in Greece, Harvard University; the Hellenic Delegation of the European Parliament; the Union of European Journalists (Greek department); the Orthodox Academy in Crete; the Club de la Presse Européenne, Paris; the Centre Culturel Hellénique in Paris; the Instituto De Letras in Rio De Janeiro University; and more.

The program is addressed to undergraduate and postgraduate students, PhD candidates, educators, while a limited number of professionals with relevant interests is also accepted, in the framework of lifelong learning. It offers certificates of participation recognition and educational material to the participants. Moreover, it includes cultural activities, always following the health protocols.

Nikoletta Tsitsanoudis – Mallidis, Associate Professor of Linguistics and Greek Language and Director of the Social Issues, Mass Media, and Education Studies Laboratory at the Department of Early Childhood Education, University of Ioannina and CHS – GR Associate, Harvard University, is the Scientific Director of the program.

READ MORE: International Summer University: What is it and why global collaborations matter?