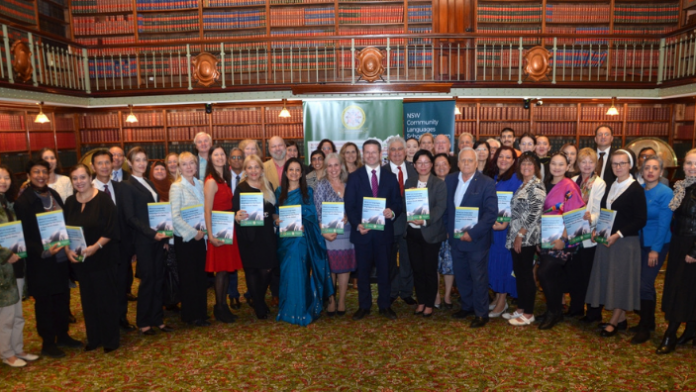 A report by Macquarie University claims that the Covid pandemic has taught New South Wales that community languages are valuable for public health and social cohesion.

The report entitled: What are languages worth? Community languages for the future of New South Wales 2022 was launched last night by the Minister for Multiculturalism, Mark Coure, at a ceremoy in Parliament House.

It was produced by a team of researchers from the Multilingualism Research Centre at Macquarie University, led by Alice Chik, Associate Professor in the School of Education, in conjunction with the NSW Federation of Community Language Schools Inc.

Professor Chik told the gathering of teachers: “You are the important bridge between the Government and our multicultural and multilingual communities. You support a smooth flow of information in both directions beween the government and the communities. Your work shows to everyone that community languages are valuable to the wellbeing of New South Wales.

Launching the report, Mr Coure reiterated his strong commitment to the teaching and learning of community languages and his belief that everyone should learn a second language so that New South Wales can embrace multiculturalism in a practical way.

“We need more detailed research out there focusing on enhancing the language capabilities of our state. We also need more research that recognises the importance and contribution of language and diversity to NSW.”

The President of the Federation, Lúcia Johns, told the gathering : “This report demonstrates to all of us that a change of attitude towards community languages is needed. It is time to value the importance of learning languages and the wider benefits of biligualism and multiluingualism.”

“Public information should emphasise the wider benefits of bilingualism and additional language learning and, especially, counter the mistaken belief that community languages compete with English in the mind of the bilingual child.”

It said NSW is emerging from two very challenging years of dealing with the COVID-19 pandemic. “During the pandemic, we have learned a great deal about multicultural and multilingual New South Wales. We have learned that community languages are valuable for public health and social cohesion.”

The report conluded that there was an urgent need for an expansion of Languages Education in schools because: “Australia lags behind the world in the number of hours devoted to languages, and New South Wales lags behind other Australian states.”

It recommended that “As a long-term goal, every child should learn at least one additional language to intermediate level and obtain a usable qualification in that language

The report includes an interactive map which should prove a useful tool for all stakeholders. It shows where schools are located by suburb and language and by State and Federal electorates.