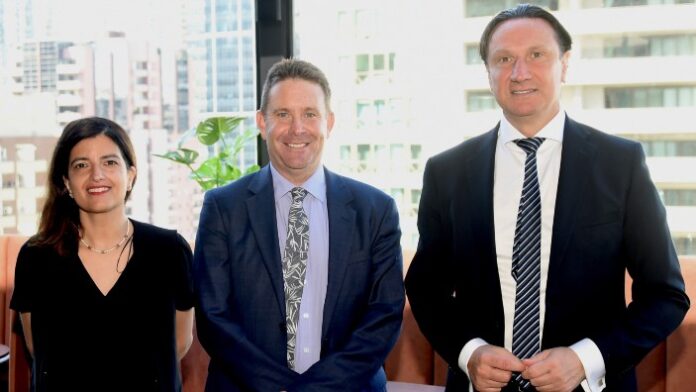 On March 31, 2021, the President of the GCM, Mr Bill Papastergiadis, and Vice-President, Ms Tammy Iliou, met with the Australia’s designate Deputy Ambassador to Greece, Mr David Kilham. Mr Kilham will commence his posting to Athens, Greece in May 2021.

The meeting was an opportunity for Mr Papastergiadis and Ms Iliou to convey important issues relevant to Greek Australians as well as opportunities to deepen the cultural and economic ties between Australia and Greece. Some of the critical issues discussed include the double-taxation between Greece and Australia; the need to advocate for clearer investment paths into Greece; and the limited visa permits available to Greek professionals and students wanting to migrate and study in Australia.

Mr Papastergiadis stated that, “The ongoing issue of juridical double-taxation needs the urgent attention of the Australian Government.” He encouraged Mr Kilham to raise this matter with the Greek Minister for Foreign Affairs, Mr Nikos Dendias, and the Minister for Greeks Abroad, Mr Kostas Vlasis, when he assumed his post.

“Bilateral cooperation between Australia and Greece needs to be a priority and the GCM is keen to see the finalisation of this matter. The GCM will continue to apply pressure until there is resolution.”

Ms Iliou said, “It is important that as soon as is practical, once travel restrictions allow, that cultural links between Greece and Melbourne are re-established, as well as with the Greek community across Australia.”

Ms Iliou invited Mr Kilham to coordinate with the GCM on cultural proposals presented to him during his posting.

The GCM greatly welcomed the opportunity to meet with Mr Kilham and thanked him for his deep interest in the organisation, and more generally, the Greek community in Melbourne. The GCM has met on many occasions with the Australian Ambassador to Greece, Mr Arthur Spyrou, and is looking forward to a continued and strengthened relationship with the Athens post.

Finally, on behalf of the Board of the GCM, Mr Papastergiadis and Ms Iliou wished Mr Kilham every success with his posting and reassured him that the GCM was ready to assist on any issue that may arise.