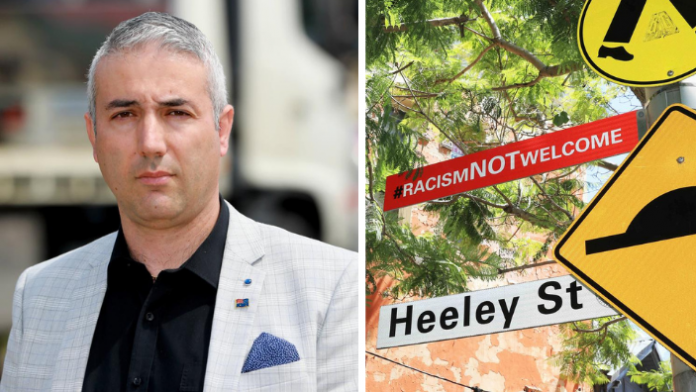 New ‘RacismNotWelcome’ signs have been increasingly adopted by left-wing councils in New South Wales, including the Inner West and the City of Sydney.

But according to The Daily Telegraph, the signs have met with stiff resistance by residents furious at being “stigmatised” with the “racism” tag.

Former Cumberland Council Mayor Steve Christou managed to block the signs being erected in his suburbs — which include the highly multicultural Auburn, Fairfield and Merrylands — last year after residents told him they “would devalue our houses” and “stigmatise” them.

Mr Christou is now a councillor after Labor took power at the last election and their first item on the agenda last week was to try to bring the signs back in.

“The overwhelming feedback I have received from members of our community is that these signs are divisive…” Mr Christou told the newspaper.

“[Residents] are saying they don’t want it on their street — it will devalue our houses.”

This resistance comes as three Woollahra councillors also staged an attempt to get rid of the anti-racism street signs in the wealthy eastern suburbs at a council meeting last week.

Only time will tell whether these signs will stay or be removed.