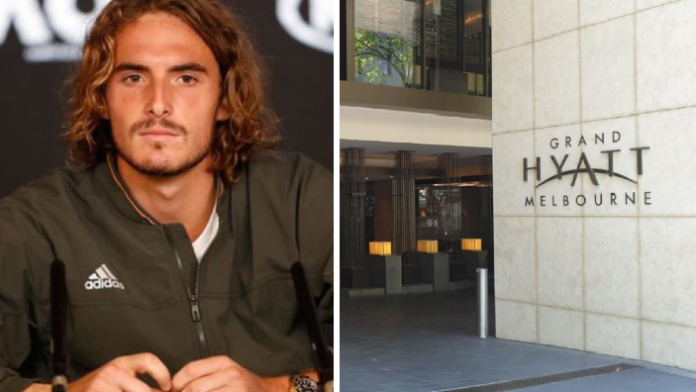 Up to 600 people associated with the Australian Open have been told to isolate after being identified as casual contacts of a quarantine hotel worker who has tested positive to coronavirus.

Among them is Greek player, Stefanos Tsitsipas, who had beaten Australian Alex De Minaur in his first match of the ATP Cup just before the news was announced by Premier Daniel Andrews in an emergency press conference overnight.

Mr Andrews said the hundreds of tennis players and support staff told to self isolate and await a negative test result.

Tennis officials late on Wednesday night issued a statement about lead-up events for the Australian Open.

“We will work with everyone involved to facilitate testing as quickly as possible,” Tennis Australia, organisers of the February 8-21 event, said.

“There will be no matches at Melbourne Park on Thursday. An update on the schedule for Friday will be announced later today.”

Victoria has reintroduced mandatory masks indoors, a cap on gatherings to 15 people in a household, and the 75 per cent return to work, scheduled to begin on Monday, has been paused.

It follows the diagnosis of a 26-year-old Noble Park, who had been serving as a resident support officer as part of the Australian Open quarantine program.

The infected man last worked at the Grand Hyatt on January 29 and undertook a PCR nasal test at the end of that shift, returning a negative test result at that time.

He later developed symptoms and got tested, returning a positive result yesterday.

The case will be recorded as a community transmission, the day the state had celebrated reaching a milestone 28 days in a row without a locally acquired infection.

Anyone who visited the following exposure sites at the specified times must be tested and isolate for 14 days:

Mr Andrews said the 26-year-old worker had attended a social function in his capacity as a volunteer firefighter.

“We are confident people will get the information they need as quickly as possible.”

From Thursday all of the 13 major testing sites in the south-east of Melbourne will open early at 8:00am with additional drive-through lanes added. Additional testing sites will open in Brighton and Monash University.