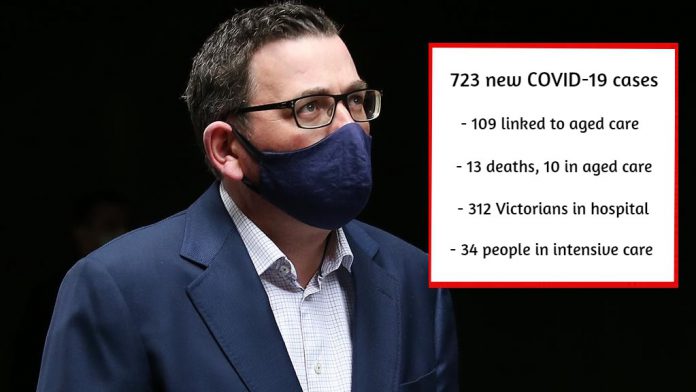 Victoria has today confirmed a further 723 new cases of coronavirus and 13 deaths, Australia’s highest daily totals since the pandemic started.

Premier Daniel Andrews said the people who died were in their 70s, 80s and 90s.

He said 10 of those 13 deaths could be connected to aged care settings, but said more work was needed to confirm the exact number.

There are now 312 Victorians with coronavirus in hospital, including 34 in intensive care.

From midnight Sunday all Victorians, including those in regional areas, will be required to wear face coverings when they leave their homes.

“It’s inconvenient, it’s challenging, but it’s essentially stage four for Melbourne, and it’s something we can do in regional Victoria without causing significant economic cost, but getting a really significant public health benefit,” Mr Andrews said.

Hopes that care at St Basil’s will improve as regular staff return:

The rise in cases comes as Victoria works to contain more than 80 outbreaks at nursing homes in the state.

The Federal Government has deployed ADF personnel, AUSMAT specialists and extra PPE to Victoria to help bolster the state’s response to the crisis.

Meanwhile at St Basil’s Home for the Aged in Melbourne, staff from the Eastern Health hospitals have headed into the home to support efforts to contain the outbreak.

“To family members, to residents, please know and understand we are, in a joint sense, doing everything we possibly can to provide the care and support that you or a loved one needs,” Premier Andrews said in his press conference today.

Australia’s Chief Nursing and Midwifery Officer, Alison McMillan, has described the “enormous mountain to climb” for workers who took over at St Basil’s Fawkner after its permanent staff went into quarantine last week.

She also added that as existing staff cleared with negative coronavirus tests returned to work in the coming days, the care would improve.

As Victoria records a new pandemic record, Greek Australian conspiracy theorist Eve Limberiou, known as Eve Black, was arrested in Melbourne, a week after she laughed her way through a police checkpoint.

The 28-year-old attempted to pull the same stunt in Carlton, an inner-northern suburb of Melbourne, but was unsuccessful.

In a statement, Victoria Police said Ms Black, from Warrandyte, was detained just before 2pm today in an arrest that forced police to smash her car window.

“She was asked to provide her name and address which she refused to do. Police then directed her to produce her driver’s licence and explain her reason for travel, which she also refused to comply with,” police said.

“This led to police arresting her. During the arrest, police were forced to break the woman’s car window as she refused to speak to them, wind down her window, or step out of the vehicle.”