Gundari Resort: The Australian investment on the Greek island of Folegandros 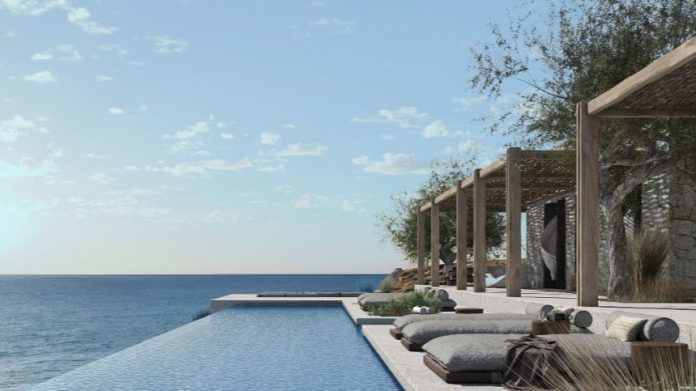 Over the last few months, the Greek islands have become a pole of attraction for domestic and international investors in the context of the development of sustainable tourism.

This comes as the Greek government has taken specific initiatives and has created fertile ground for sustainable development investments.

The long-term plan to ensure that tourism in Greece continues to grow in a sustainable way is called “GR-eco Islands” and aims to promote an integrated green conversion of small islands (up to 5,000 inhabitants).

At the same time, it created a narrative that went around the world and became a new marketing tool that promotes the domestic tourism product and investments.

Through “GR-Eco Islands,” the islands will become models of sustainability through the application of new technologies and methods in areas such as waste management, green transportation and energy production.

Folegandros is one of the 40 islands that joined this program and an Australian company decided to create the foundations for its sustainable development, while stimulating the local economy of the island.

The Gundari Resort, which will operate in 2023 if the schedule is met, is the brainchild of an Australian, Ricardo Larriera, who aspires to create a commercial name for himself by creating luxury hotels which promote sustainable tourism development.

The opening ceremony of the construction works took place about two weeks ago and this project is expected to give a new impetus to the island, as admitted by the Mayor of Folegandros, Efthalia Papadopoulou, who spoke to The Greek Herald about this great investment.

“We are very pleased with the implementation of such an investment whose design combines luxury and sustainability. It is important that every new investor loves and respects our place and the environment, such as Ricardo, so that Folegandros manages to preserve the uniqueness of its nature and its culture,” Mrs Papadopoulou says.

“Of course, every new investment, and especially a large investment such as that of the Australian company, is a significant boost for the economy of our island.”

The presence of the Australian Ambassador and the new investment:

The project will be created by the Greek architectural firm Block722, which is based in Athens and sets as a priority the complete harmonisation of the luxury hotel with the wild nature of the island.

The opening ceremony of the construction works was also attended by the Ambassador of Australia to Greece, Arthur Spyrou, who praised the beauty of the island and underlined the love of Australians for Greece, its culture and the uniqueness of its nature.

Ambassador Spyrou said the interest of Australian investors in Greece was very high. Something confirmed to The Greek Herald by the Mayor of Folegandros.

“The Australian Ambassador, Arthur Spyrou, expressed his admiration for Folegandros and together with other Australians who attended the island, discussed the possibility of another investment,” Mrs Papadopoulou reveals.

“With the exception of the two-year pandemic, every year, citizens from Australia visit our island and express their interest constantly.”

This is what happened to Ricardo, an advertising executive in Sydney, when he fell in love with Folegandros and wanted to start Gundari Resorts from there.

The wild, almost mystical, beauty of Folegandros impresses its visitor and binds his thought to the moments he spent there. The Mayor of Folegandros highly recommends the island for those who have not visited it.

“Folegandros is an island that has preserved its natural colour, its traditional character and in combination with its crystal clear beaches and its special Chora with the castle and the imposing Church of Panagia at the top of the settlement, stands out and has emerged as one of the first tourist destinations. We are waiting for you,” she says.

Gundari Folegandros will be completed in two stages. The first with 26 rooms will open its doors in 2023, while the second will be ready within two years, with the number of rooms reaching a total of 50.

Staying at the resort will be fully in tune with the relaxed rhythms of life on the island, while its aim is to bring guests not only close to nature but also to experiences that will change the way they see life.

It is also an Australian investment that will significantly stimulate the local economy of the island.