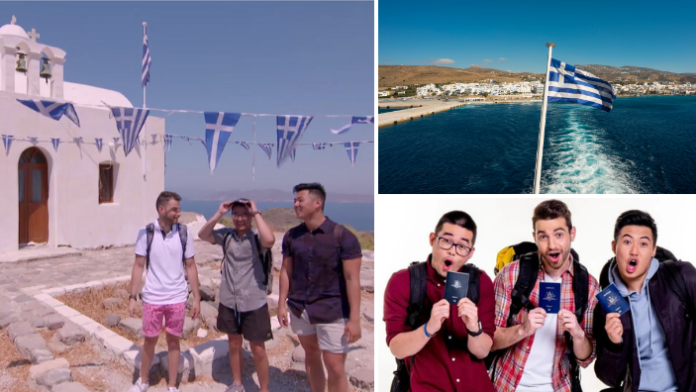 An opportunity to travel the world for free? Sign me up!

This is exactly what Travel Guides trio Dorian (24), Kev (28) and Teng (25) did after seeing a Nine Network casting ad posted to Facebook, while on the hunt for cheap flights to Bali.

“We thought it could be fun to maybe make a video and audition tape and send it in and we’ll never hear back from them,” Dorian said to The Greek Herald.

“All of a sudden we heard back from him three days later.”

The three good mates are former Target co-workers and budget travellers who share a love of junk food, computer games, music and movies. The trio made their first appearance in season 2 of the show and have continued their travel adventures this coming season (Season 4).

Despite referring to themselves as “the three Asian boys”, Dorian comes from a Greek Australian family, with his yiayia arriving in Australia in the mid-to-late 60s and settling down in the Melbourne suburb of Oakleigh.

Despite his proud Greek heritage, Dorian never had the opportunity to visit Greece until he was sent there in 2019, unknowingly, by the Travel Guides producers.

“I was meant to go (to Greece) I think three times and always had to cancel last minute.”

In the series return, the trio, along with the other Travel Guides, take off on a Greek island-hopping holiday. Starting in the ancient capital, Athens, they hop aboard the ferry to the party island of Mykonos and the traditional island of Milos.

Most Greek Australian families know that when they plan a trip to Greece, a visit to see the relatives is a high-end priority. However, under a tight schedule of only a week in Greece, Dorian said there was no time to visit his extended family.

The “three Asian boys” have collected many fans throughout the show’s airing, but none bigger than Dorian’s mum.

“I sort of can’t go to any supermarkets or anything without mum having told the people at the checkout that I’m going to be on the show tonight.”

“My whole family was super stoked. Obviously they wish we could have met relatives, but there just wasn’t any time and we weren’t in the right places, unfortunately.”

To kick off the Greek holiday, the Travel Guides checked out the historical sites of Athens and, putting their own twist on history, they go for a few Olympic records of their own, with varying levels of success.

Leaving Athens they head to the party island of Mykonos, to which when Dorian was asked about the differences in the party scene between Greece and Australia, the Greek Australian said it “doesn’t compare”.

Back on the ferry, the travellers head for more stable shores. The best-kept secret in the Greek Islands awaits them on Milos, where white volcanic cliffs curve like marble into vivid blue seas.

But the party has also followed them to this traditional paradise, where it’s one of the biggest festival days of the year and the whole island has gathered to celebrate with bells on.

Dorian revealed to The Greek Herald that Greece has been his favourite visited location on the show so far, with Athens’ history and beauty being a lifetime highlight.

“It’s the heart of everything, so much history there,” Dorian said.

“The people sort of reminded me of Oakleigh times 20; People calling out to each other on the street, walking around with their coffee, sitting at the cafes all day.”

“My least favourite moment was probably boarding a plane to leave.”

The fourth season of Travel Guides will premiere on Wednesday, April 28, on Channel 9.