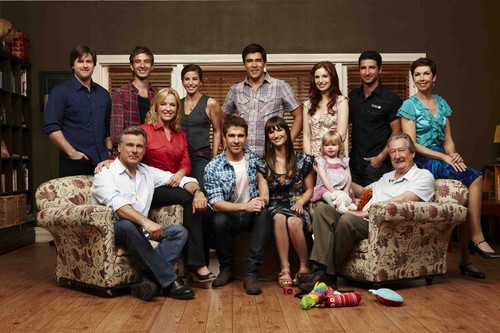 Amazon announced today that they will be debuting their first scripted Australian Amazon Original series – Back to the Rafters.

Houvardas played the “Greek boy-next-door” in the popular series, which launched his popularity on Australian television. Since then he has taken up new roles, including a leading role in the ABC’s hit new series ‘Frayed’.

READ MORE: George Houvardas: new role on ABC’s Frayed and why he refuses to play the Greek stereotype

The Vice President of International Originals at Amazon Studios, James Farrell, expressed his excitement for the return of the Rafters on Amazon.

“Packed to the Rafters is among the most beloved Australian series and this revival will allow us to give our customers the locally relevant entertainment they want. We’re thrilled to be working with Seven Studios to bring back the Rafter family for Prime members in Australia and around the world,” said Farrell.

“The world has changed so much in that time, and it is a writing dream to be able to explore how the Rafters have changed with it, while at the same time reconnecting with the life affirming combination of humour and heart that characterised the original series. In an increasingly dark world, it is wonderful to use the Rafters again to spread light.”

The series will launch on Prime Video in Australia and around the world in more than 200 countries and territories, with filming scheduled to begin in 2020 with Seven Studios.