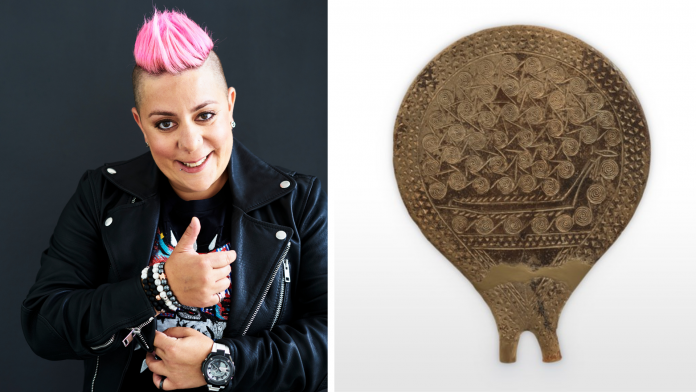 Anna Polyviou is an award-winning Greek Australian pastry chef like no other. Well-known for her distinctive pink mohawk, her quirky urban style and her contagious fun attitude, Anna never disappoints her fans.

That’s why when we asked her to share her top three artefacts from the Melbourne Museum’s Open Horizons exhibition, she jumped at the chance to delve into the Ancient Greek history on show.

From an ancient frying pan to an ancient stele, Anna chose what resonated with her the most and didn’t hold back in stressing that she also liked the “community photos” aspect of the exhibition.

Why? Because, she said, “I think it is super important for us as a community to hold onto memories like photos. I love seeing how our community has grown and flourished in Australia.”

Alexandra was an initiate in the cult of Egyptian goddess Isis.

Cybele was a mountain goddess associated with the Near Eastern goddess Kubaba. Characteristic of her worship were ecstatic rituals in wild locations. The cult of Cybele spread from Phrygia.

Anna says these two statues were her favourite as they “remind me of visiting Greece and exploring the ancient ruins. I love learning about the Ancients Greek Gods.”

This frying pan was used by the ancient Cycladic peoples. The Cycladic peoples lived in the southern Aegean Sea islands north of Crete. They traded with mainland Greece from about 6,000 BCE.

Anna says this artefact resonated with her because of her profession.

“As a chef I think I’m always going to be drawn to cooking equipment through the ages. It’s so interesting how they would cook back then,” she concludes.