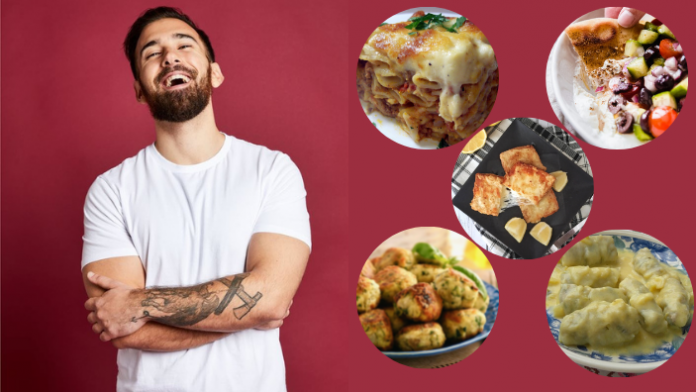 Anthony Locascio is back this week to tell us all his favourite Greek recipes, from things he found in Greece to things his Yiayia made for him growing up. Are his favourites in your list as well?

Like traditional dolmades but swap out the vine leaves for lahano (cabbage) making them bigger and badder; and with Greek food, bigger=better is usually the mantra! These are my Yiayia’s go to – avgolemono on top is optional, but recommended. (Avgolemono is a lemon/egg sauce, but is often confused with the kotosoupa, chicken soup, which is served with avgolemono on top as a main attraction of the Greek Easter feast).

(basically Greek Lasagne)-pasta plus mince is always a victory, but adding a roof of bechamel is the stroke of culinary architectural genius you never knew you needed. Probably the most common dish to find in a Greek/Aussie household too. Often mispronounced ‘PastiCHO’ – an example of the Aussie bastardisation of Greek as with the avgolemono confusion above (it really upsets me, sorry).

Keftedes are meatballs, but these ones are made with kolokithi (zucchini) and your choice of Greek cheese. I could plow through about 30 of these at a restaurant in Greece if nobody stopped me. Plus the word is fun as hell to say. I actually never tried these until going to Greece as a kid, but I promptly begged my Yiayia to learn the recipe. She actually already knew it, and was holding out on me. We didn’t speak for months.

You could probably deep fry a sock in olive oil and drizzle honey on it and it’d taste alright, so doing so to kefalogaviera, my personal pick for Greece’s best cheese, is like touching heaven. Usually drizzled with honey, I’ve been told by some restaurant owners that ‘real Greeks drizzle Ouzo’ onto it, and I worry for these people’s livers. Unless you fancy oil smatterings as a nice addition to your kitchen wall paint, don’t try to make this one at home.

This is a total cheat, but sue me. Papara is not a food per se, but a philosophy; nothing is wasted. The art of papara is mopping up any remnants of your meal, be it one of those I’ve mentioned or simply the last trickle of oil in your Greek salad, with fresh Greek bread. This is, for lack of a better way of putting it, the woggiest shit you can do.