World Poetry Day: 5 Greek poets whose works have stood the test of time 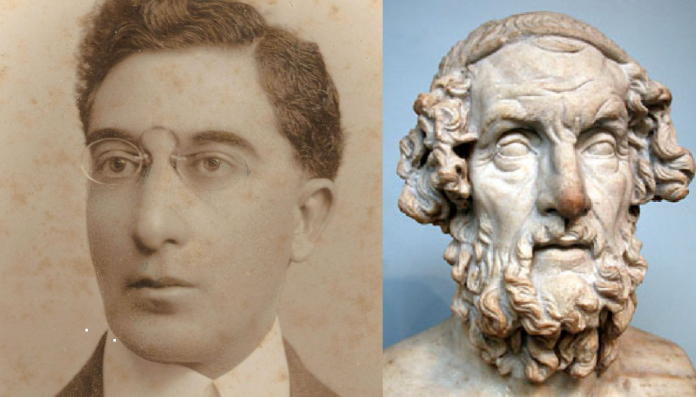 Poetry arguably isn’t everyones cup of tea, yet at some point in everybody’s lives they have either studied a poem for school, or read one in their own time, and it has left a significant mark on their way of life. As more poets works are developed throughout the centuries, only a select number of poets possess works that have been studied for generations.

The ancient Greeks were the trailblazers of poetry and with today being World Poetry Day, we’ve put together a collection five Greek poets whose works have stood the test of time.

Born in Alexandria, Egypt on April 17th 1863 (according to the old calendar – April 29th according to the new calendar), Cavafy was raised in the Greek district of Constantinople and is recognised as one of the biggest figures in Greek poetry.

During his lifetime Cavafy was an obscure poet, living in relative seclusion and publishing little of his work. This lack of concern for publication was due, perhaps, to the highly personal nature of many poems. Cavafy, who was gay, wrote many sexually explicit poems in the early years of his piety writings, however gained much critical acclaim from his philosophical and historical poems.

Cavafy is best known for his prosaic use of metaphors, his brilliant use of historical imagery, and his aesthetic perfectionism. He is also known as a very stoic poet, and most of his poems deal with his internal crisis of marginalisation. Because of this, he only created about 200 poems, acting as his harshest critic.

Some of his most well-known poems include ‘Ithaka’ and ‘The City’.

Cavafy’s poem ‘Ithaka’ is a sentimental and philosophical piece that aims to remind readers that the journey is more important than the destination. This destination can be both physical and metaphoric, however many interpret this poem as symbolising the act of transitioning through life, from beginning to end, and to finally returning to one’s origins.

One of the most legendary poets of all time, Homer orally composed two major works, the Iliad and the Odyssey. Records state that he was born around 8th – 9th century B.C., yet many scholars have raised the argument that the man known as ‘Homer’ possibly existed as multiple people. Despite investigations, it is assumed that he resided in Ionia due to the dialect and descriptions of his poems.

In conjunction with Hesiod, Homer acted in ancient times as a great pool of information for the Greeks about their gods. Homer is said to have developed many other works, yet even in antiquity, their authorship was disputed.

His two globally recognised poems, the Illiad and the Odyssey, were first compiled, organised, and edited under the Athenian Peisistratus, but the Greek text that we have survives from such Alexandrian scholars as Zenodotus and Aristophanes of Byzantium and Aristarchus.

The earliest poet in Western culture whose works have survived intact, this legendary Greek poet has stood the test of time of being one of the most significant culture figures in ancient Greek literature.

Giorgos or George Seferis, the pen name of Georgios Seferiades, was one of the most important Greek poets of the 20th century, and a Nobel Prize recipient for Literature.

Seferis was born in Urla, near Smyrna (now Izmir, Turkey), yet worked as a diplomat for the Royal Greek Ministry of Foreign Affairs while developing poetry.

Seferis was the most distinguished Greek poet of “the generation of the ’30s,” which introduced symbolism to modern Greek literature. His refined lyricism and the freshness of his word choice brought a new breath of life to Greek poetry. His work is permeated by a deep feeling for the tragic predicament of the Greeks, as indeed of modern man in general.

Receiving a Nobel Prize in Literature in 1963, the Nobel Prize committee recognised him as a “representative Hellenic poet.” The Poetry Foundation writes that his poetry often intertwines contemporary speech and experience with Homeric myth, and many of his poems depict the landscape of the Mediterranean.

In their foreword to George Seferis: Collected Poems (1995), translators Edmund Keeley and Philip Sherrard noted: “The distinguishing attribute of Seferis’s genius—one that he shares with Yeats and Eliot—was always his ability to make out of a local politics, out of a personal history or mythology, some sort of general statement or metaphor.”

Sappho was an ancient Greek lyric poet from the island of Lesbos, who resided in Archaic Greece. Unlike Homer, Sappho spoke her poems through song, being considered one of the greatest lyric poets. Little is known with certainty about the life of Sappho, yet it is likely she was born probably about 620 B.C. to an aristocratic family on the island of Lesbos.

In antiquity Sappho was regularly counted among the greatest of poets and was often referred to as “the Poetess,” just as Homer was called “the Poet.” Plato hailed her as “the tenth Muse,” and she was honoured on coins and with civic statuary.

Most of Sappho’s poetry has not been found apart for one complete poem: the ‘Ode to Aphrodite’, which tells of the speaker calling on the help of Aphrodite in the pursuit of a beloved. According to ancient commenters, Sappho also composed elegiac and iambic poetry alongside lyric poetry.

In modern times, her poetry has found relevance and readership and has come to be seen as a symbol of love and desire between women. Apart from her fascination with the theme of love, Sappho placed emphasis on emotion, on subjective experience, and on the individual.

Alcaeus, who was born in 620 BCE in Lesbos, was a Greek lyric poet whose work was highly esteemed in the ancient world. Living around the same time as Sappho, Alcaeus is regarded by the modern world as the genius who created the Alcaic stanza, a form that has been adapted and commonly used in modern poetry.

Alcaeus’s poems are classed in four groups: hymns in honour of gods and heroes, love poetry, drinking songs, and political poems. From an analysis conducted by Britannica, it is suggested that they reflect the vigour of the poet’s involvement in the social and political life of Mytilene. They express a closed world of aristocratic values and conservatism, in which realism and idealism coexist—although the idealism is limited by the norms and goals of the poet’s political faction.

Only fragments and quotations from Alcaeus’s work survived into the Byzantine Middle Ages and into the modern world, but papyrus texts discovered and published in the 20th century considerably expanded knowledge of his poetry, enabling scholars to evaluate his major themes and his quality as a poet.

Alcaeus was famously included in the canonical list of nine lyric poets by the scholars of Hellenistic Alexandria.