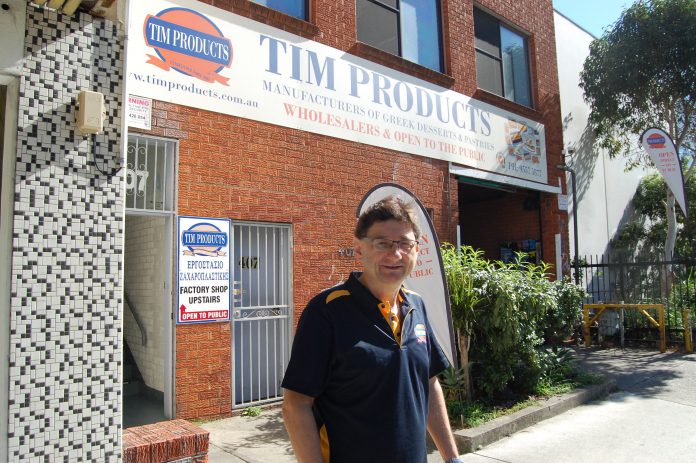 Marrickville is definitely not only shop fronts and windows along Marrickville and Illawarra Roads; what makes Marrickville such a unique suburb is how its long retail and eatery strips are complimented by its vast industrial area. Despite the passing of decades, the Greek presence within this industrial area remains strong; some iconic and successful Greek businesses and companies are based in Marrickville and their products and services contribute to local, national and international markets. Although we often concentrate on shops too much, we should also focus on the Greek contribution in manufacturing, industry and service.

One of Marrickville’s iconic business is definitely TIM Products; their Greek sweets, biscuits and pastries are known Australia-wide.  Although TIM Products has been around for decades, John Manis’ story is equally amazing too. As a ‘Marrickville boy’, he found a job in the local area (TIM Products) and, after many years, he became a partner and eventually took over the business. John always remained a ‘Marrickville boy’…

TIM Products dates back to Hellas Cakes in Glebe; it was Chris Theodorides, Kostas Isaias and Margaritis Margaritis, came to Marrickville to set up a new company, TIM Products, and their products were not pastries, sweets and biscuits- it was a frappe coffee. As it turned out, the three partners were ahead of their time and this venture unfortunately did not take off. It is during this transition period that John Manis begins his pastry cook apprenticeship with TIM Products. With Kostas leaving the partnership, Chris and Margaritis started all over again- making Greek sweets and biscuits.

Having worked with TIM Products for so many years, it is fascinating to listen to John recount the major turning points in the business; for instance, the launch of their σπανακόπιτα (spinach triangles) in the late 1980s grew to the point that four days a week were dedicated to keeping up with the demand for their σπανακόπιτα! With a growing reputation, Black Stump even asked TIM Products to manufacture their rum baba! With TIM Products’ HACCP accreditation in the mid 1990s, the business continued to grow.

TIM Products is known Australia wide; for instance, a major customer is Darwin’s Greek community who place several orders a year and cater for their Greek Glendi Festival.

John provides an insightful explanation on how Australians have learnt to enjoy Greek foods, ‘Australian tastes have changed over the years. Australians have been educated and become experienced in different cuisines, whether it is through travel or television cooking shows. For many years, we were making μπουγάτσα (custard pie with filo pastry top); once George Calombaris cooked up μπουγάτσα on his MasterChef TV show, we had all these businesses – and many were non Greek – asking for μπουγάτσα! ’ And μπουγάτσα went mainstream!!!

TIM Products’ σπανακόπιτα story of the late 1980s should not be underestimated; with thousands of ferry commuters in a rush to get to work, they needed a warm, wholesome snack in the morning and it was the Greek-run eateries at Circular Quay who satisfied their appetites with these ‘spinach triangles’. As Greeks, the σπανακόπιτα was always part of our cuisine, whether our yiayia or mum made it, but it was TIM Products, and these Greek-run eateries, who played such an important role in bringing it into mainstream Australian society. And that just emphasises how Greek foods have been embraced by Australians and become part of its cuisine!!!