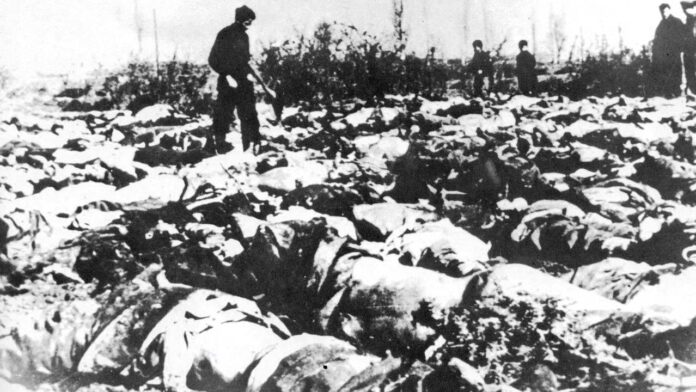 The gruesome massacre of innocent Greek people in Kalavryta occurred in 1943, at the time where the Axis had Greece occupied (April 1941-October 1944) by German, Bulgarian and Italian armed forces.

The operation to massacre the Greek village of Kalavryta began in October 1943, after Greek resistance forces captured 80 German soldiers during a battle in the village of Kerpini, near Kalavryta.

After the soldiers were captured and held as prisoners, Nazi forces threatened to massacre nearby villages out of revenge if the Greeks didn’t release the prisoners.

However, despite the church in the village trying to reason with the resistance forces to free the German prisoners, the leaders all refused.

After the Greeks refused, the German 117th Jäger Division took action. On December 8th 1943, the German troops entered nearby villages of Kerpini and Pogi, killing the entire male population of both villages.

The Greek forces retaliated by executing the German prisoners, with one German soldier managing to escape.

By December 13th, 1943, The German troops entered Kalavryta, demanding they speak with the Greek forces who held the Germans captive, however, the Greek soldiers had already left the area once the execution was completed.

Despite the villagers pleading with the German soldiers to leave, telling them the Greek soldiers already left, the Germans refused.

The Nazis ordered everyone living in Kalavryta to go to the town’s school. From there, the Nazis locked the women and children in the schoolyard, meanwhile forcing every male aged over 12 to walk up to Kapi Hill. They were ordered to the top of the hill because the men were forced to look down to the city of Kalavryta, and see the women and children locked in the schoolyard.

From there, the gruesome massacre began. The Nazis lit the school on fire with the women and children trapped, waiting to be burnt alive while the men would watch the horror unfold. As the school was being burnt down, the men on the hill were brutally massacred, shot dead by the Nazis.

Of the 700 odd men that were standing atop of the hill, only 13 managed to survive.

Fortunately for the women and children, they managed to escape from the burning school, it is believed that an Austrian soldier freed them, while the some other Nazi soldiers also allowed them to be freed.

The days after Operation Kalavryta were horrific. The wives, sisters and children of the men who were brutally murdered were now forced to bury their beloved loved ones.

Despite being granted the right to live, Kalavryta had been completely burnt down and ransacked by the Nazis. The women and children were left homeless and starved.

Unfortunately, the Germans didn’t stop there. They continued their onslaught of nearby Greek villages, as well as the monastery of Agia Lavra, an important landmark of the Greek War of Independence.

The town’s cathedral was eventually rebuilt once the German occupation was over. The clock that is on the cathedral shows the time of 2:34pm, and will remain that way forever. The time is stopped to mark the exact time the murdering of the men had begun.

Moreover, the site of the schoolyard where the women and children were locked up, became the Kalavryta Holocaust Museum in 2005. The museum has objects on display from the Nazi occupation, photographs depicting the events, as well as newspapers and documents from that specific dark time in Greek history. In the museum, some of the floors are still burnt to remember the horrific events of that fatal day.

The Kalavryta massacre remains one of the darkest days in modern Greek history.