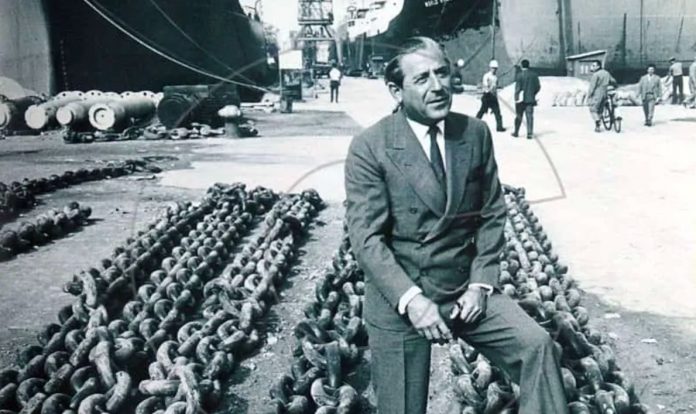 Stavros Spyrou Niarchos was a Greek shipping magnate worth billions of dollars. His fortune came as a result of the Suez Crisis and the rising demand for oil, he and his fellow country man turned competitor, Aristotle Onassis, seized this opportunity and became worldwide petroleum transport titans bringing in millions. In order to dominate the marketer, Stavros began building the world’s largest supertankers for his fleet in 1952. Niarchos was also a well-known thoroughbred horse breeder and racer, the top leading owner and number one on the French breed list numerous times.

Stavros Spyros Niarchos was born in Athens on July 3, 1909. His ancestors were from the Laconian village of Vamvakou in the Peloponnese. He began his adult life by studying law at the University of Athens, he later starting work at his family’s grain company in 1929. Whilst working for his the company he noticed how much money the company was spending on transportation costs associated with importing wheat. Niarchos felt that owning the ships that supplied the cargo would save money. As a result, he purchased his first six freighters during the Great Depression and began his shipping tycoon.

Stavros Niarchos was married five times, including to two sisters and to Charlote Ford, the daughter of the famous automaker Henry Ford II. During his marriages, he had five children, three boys and two daughters.

World War II and his first steps in shipping career

During WWII, Niarchos served in the Greek Navy,  whilst serving, The Allied Forces rented Niarchos’ first vessel. After the ship was destroyed in battle, Niarchos utilised the insurance proceeds from the destroyed vessel to build a new fleet after the war. As a result, Stavros Niarchos began to emerge as a new contender in the world of international trade. He was the world’s largest private fleet owner for many years, with his business managing more than 80 tankers and other ships. During his career, one of Niarchos greatest success was building the largest supertanker in the world, he named it after his second son, Spyros. The ship was built and launched in 1955 by Vickers Armstrongs Shipbuilders Ltd. A year later, Niarchos agreed to develop and run the Hellenic Shipyards, the first private development in Greece, which quickly grew to become the biggest Mediterranean shipyard. The shipyard was taken over by the state in 1985, but Niarchos’ dedication to Greece remains an excellent illustration of the strength of private investment for the country’s economic well-being.

Stavros Niarchos died in 1996 in Switzerland. His estimated wealth was $22 billion at the time of his death. His money and assets were split between his sons and daughters, and twenty per cent was given to charity. In honour of his life, a foundation was established the same year of his death. Niarchos’ devotion to Greece and Hellenism, as well as his strong instincts and interests in favour of causes in education, social welfare, health, and arts and culture, inspired the foundation’s purpose.