On this day in 1864, the new Constitution of Greece was published 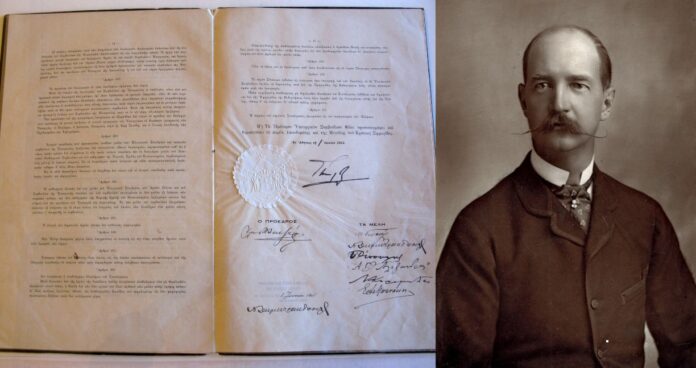 On this day in 1864, the new Constitution of Greece is published, marking a monumental day for the future of Greece and its democracy.

Up until 1863, Greece was under the rule of King Otto, which lasted for 30 years. By the end of his rule, many Greek politicians were growing intolerant of King Otto’s constant interference in Government. In 1862, King Otto dismissed the Greek Prime Minister, provoking a military rebellion, forcing Otto to step down from his unwelcome role.

Following this, the Greek government asked Prince Alfred of Great Britain to take the crown of the Kingdom of Greece, which he denied. Instead, Prince George Christian Willem was crowned the constitutional King of Greece, to be named King George I of Hellenes. Shortly after, Athens hosted the Second National Assembly of the Hellenes in 1863, which is where the new Greek Constitution was born.

Under the new reign of King George, Greece adopted a more democratic constitution through the Constitution of 1864. This new constitution established in clear terms the principle of popular sovereignty, granting the Parliament with reversionary powers.

The Constitution of 1864 implemented significant changes to the governing rule of Greece. Under this constitution, the powers of the Monarchy were reduced and the senate was abolished. Despite these changes, the Greek politics remained heavily dynastic and family run.

The constitution of 1864 marked the beginning of Greece’s transition from a constitutional monarchy to a crowned republic, thus creating several changes within Greek society.

The most noteworthy amendments made were concerning the protection of human rights. This included increased protection of personal security and equality of tax burden. The constitution also facilitated expropriation to allocate property to landless farmers whilst also protecting property rights.

The Greek Constitution has since been modified and developed, but people will never forget the monumental changes that the Constitution of 1864 brought to Greece and its people.