‘Music has no borders’: Georgios Xylouris on teaming up with Australian drummer Jim White 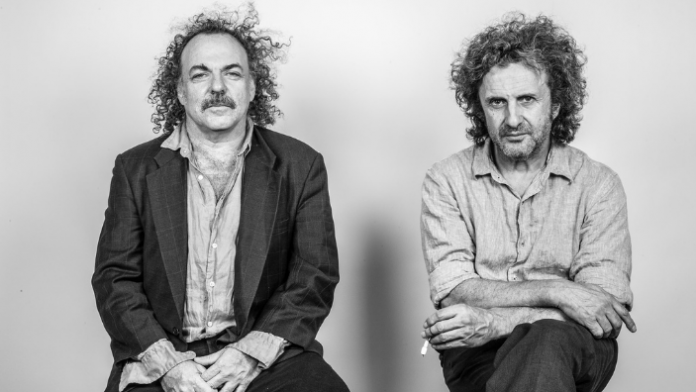 When The Greek Herald found out, we just had to speak with Xylouris about the tour and his collaboration with White. This is what he had to say.

1. Tell us about your upbringing and first interactions with music.

Music has always been with me all my life. I remember my father gave me a mandolin as a present when I was four years old and that’s when I started playing music.

In the village where I grew up, there were a lot of musicians and they played at paniyiria, weddings and gatherings in the cafes and village square. I watched and studied these musicians. I learnt to play from these musicians. From a very early age, I followed my father Psarantonis around Greece, Europe and around the world and became a professional musician at 13 years old.

2. How did the collaboration with Jim White come to be?

I came to Australia in the late 80’s touring with my father. I fell in love with Australia and met my partner and became a “love immigrant” and lived in Melbourne for a few years. It was during this time when I met Jim. We used to talk and exchange music and ideas and he used to come and see me play with my band, Xylouris Ensemble.

Jim had just started the band, The Dirty Three, and they asked me to play as a special guest. I recorded songs with them and from there started our journey and collaboration.

Through the music town of Melbourne, I have the feeling we have our own tradition. When Jim came to visit me in Crete a few years ago, we took the opportunity to get into a studio to see how we would sound. We found we had a lot to share. That was the beginning of Xylouris White. Two different music worlds came together and that gave us the enthusiasm to keep going. We now have four records out over the last nine years.

3. How would you describe the music you produce as a duo?

If we were to put a label on our music we would describe it as Goatish. Katsikishia! If you need more explanation take a listen to our music and that sound will take you there.

4. Why is it important to embed elements of Cretan tradition in your music?

It’s not important. That is who I am. Jim is who he is and that’s the importance of this duo. Our centre is the music culture of Melbourne and Crete. Music is like a bird. It doesn’t have borders.

5. What can we expect from the fifth album? Do we have a title and an estimated release date?

Expect something different from all our previous records. It was recorded during the lockdowns and we recorded in separate countries. I was in Crete and Jim was in Melbourne. The new record will be released towards the end of the year.

6. What is the plan with the May-June Australian tour?

We are looking forward to do some good shows in Australia so we can return again.

Tickets for all shows are now on sale at: feelpresents.com.