On This Day: Stelios Manolas hung up his football boots for the last time 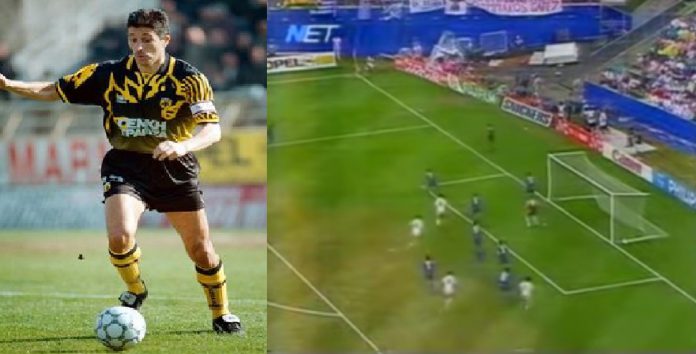 Few words can describe the Greek footballing icon that is Stelios Manolas. Yet one that seems to fit accordingly is ‘loyal’. Stelios Manolas is a Greek former professional footballer who played as a centre back throughout his career, widely considered as the best Greek defender of his era.

Born on the island of Naxos in 1961, Manolas was raised on the streets of Athens in the suburb of Galatsi. The Greek defender was exposed to football from a young age, playing on the streets and vacant lots.

Discovered by scouts when he was only 15, Manolas played for the AEK Athens youth squad. A team which he would see himself with for the rest of his career.

Manolas racked up a total of 73 caps for his country, yet is most praised for his astounding 447 caps for his home club, AEK Athens. The Greek international remains one of the few Greek footballers to have played their entire professional career for a single club.

When targeted early in his career by FC Porto and Monaco, Manolas affirmed his commitment to AEK saying: “I will never leave the club I love and I want to retire at AEK.”

One of his most special memories, one that not many people would forget, was his crucial block with his head in front of goal, preventing Olympiacos from scoring. As a result of the block, AEK Athens won the 1989 Championship title.

Manolas hung up his football boots for the last time in his final match against Xanthi in 1998, awarding AEK Athens the win in a 2-0 victory.

Manolas’ legacy lives on in the spirit of his nephew Kostas Manolas, who currently plays as central defender for Napoli and the Greek national team.