On This Day in 1453: The Fall of Constantinople 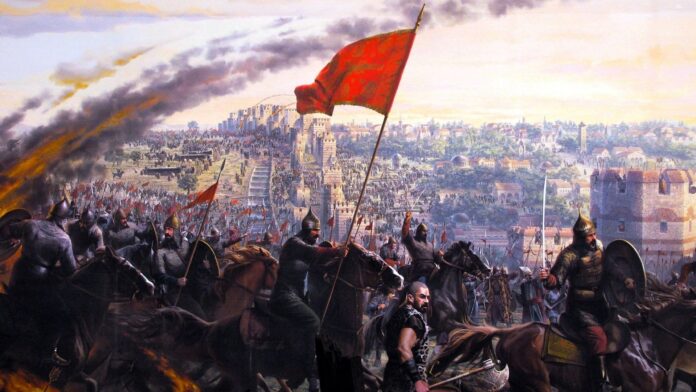 The 29th of May, 1453, marks the end to one of the longest-lasting Medieval powers and the beginning of centuries of Greek oppression. The Byzantine Empire, an extension of the Roman Empire, fell almost two months into grappling against an Ottoman siege. Constantinople, the centre of the Byzantine Empire, is today known as Turkey’s major city Instanbul. The Greek Herald looks back on how the Ottomans captured Constantinople and the repercussions it had for Greek life and culture.

The first Christian capital: Constantinople had been the seat of the Byzantine Empire since 330 AD.

The Byzantine Empire had been the cradle of Roman civilisation since 330 AD but had slowly dwindled in population and size since. It was once a super-power but centuries of constant warfare and conflict over the East-West schism (1054) in the Christian church had torn the empire apart. It continued to shrink through to 1450, where it was just surrounded Constantinople by a few square kilometres.

Constantinople was the seat of Imperial Power when Constantine the Great, the first Christian Roman emperor, declared it his capital. The city had been targeted several times before, falling only once during the Fourth Crusade in 1204, but eventually became threatened by a massive army led by Sultan Mehmed II, who was hellbent on making the capital his new seat of power. Why? Constantinople was not only a bastion holding against Muslim control of the eastern Mediterranean, but it was also the gateway to eastern Europe. Constantinople marks the crossroads between Europe and Asia Minor and it’s fall would allow Ottoman expansion into the continent and leave it’s mostly secular states vulnerable to attack. Rome, which was the last of five major cities not under Ottoman control, was particularly vulnerable. So much so, Nicholas V put out a crusade to retake Constantinople from the Ottomans.

The Ottomans had conquered most of the Balkans and Anatolia dating back to the 14th century. Mehmed II intended to fulfil his father’s vision of the Ottoman Empire’s expansion. Mehmed II and the Byzantine Emperor, Constantine XI Palaeologus, were rallying support ahead of a massive blow-out between the two Empires.

The battle saw both lead impressive armies, but one slightly larger than the other. 50 to 80 thousand Ottomans descended on 7 to 10 thousand Byzantines; an army a fraction the size of theirs. The Ottomans were also well-equiped with cannons and artillery. The Byzantines, on the other hand, had one of the strongest sets of fortified walls in existence. This, however, was only enough to hold back the Ottomans for fifty-five days until they finally suceeding in their siege.

The death toll of Byzantine’s was staggering. It is estimated that four thousand Byzantine soldiers died while battling the Ottomans, and a further 30,000 were enslaved in the aftermath. The Ottoman death toll is unknown but is assumed to have been substantial.

The fall of Constantinople is considered to be one of the most important events in human history.

To some historians, it marks the end of the Medieval Period, and to others, the long, drawn-out fall of the Roman Empire.