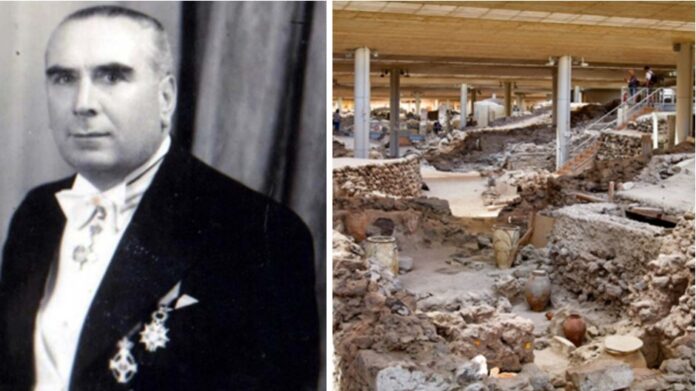 Spyridon Marinatos is one of the most famous archaeologists of the twentieth century, discovering the Bronze Age city of Akrotiri. But on this day in 1974, he died at the age of 72. To mark the occasion, we look back on his incredible life and his miraculous discovery.

Marinatos studied archaeology and philosophy at Universities of Greece, Berlin and Halle.

In 1929, Marinatos’ archaeologist career began when he became director of the Heraklion Museum, along with Georgia Andrea, in 1929. It was his time as Director that he began a working relationship with Sir Arthur Evans, famous archaeologist known for his discovery of Knossos, a city in Crete.

In 1937, Marinatos became the director of Greece’s archaeological service and in 1939, became an archaeology professor at the University of Athens.

It was Marinatos’ time as a professor at the University of Athens that he became interested in what he regarded as the first Greeks, the Mycenaeans.

While working on the excavation site in Knossos in 1939, Marinatos began hypothesising the reasoning behind the destruction of the Minoan people in Crete. Marinatos proposed the idea that because Crete is near the Hellenic Trench, it experiences frequent natural disasters like activity.

The volcanic rocks discovered at the site of Knossos were analysed by Marinatos, resulting in his belief that these were rocks from the nearby island of Santorini.

Marinatos began working on his theory in 1967, as he oversaw the excavation site in Santorini. While he researched his theory that the Minoan civilisation ended due to a volcanic eruption, he discovered the ancient Bronze Age city of Akrotiri.

Akrotiri was an extraordinary discovery, as visitors are able to get firsthand visuals on what it was like to live during the Bronze Age, as the volcanic ash covered the city and kept it preserved, becoming a Greek version of Pompeii.

Marinatos continued to work on the excavation site until he died in 1974 while working at the site, with the cause of his death still relatively unknown. He will be remembered as one of Greece’s greatest archaeologists.