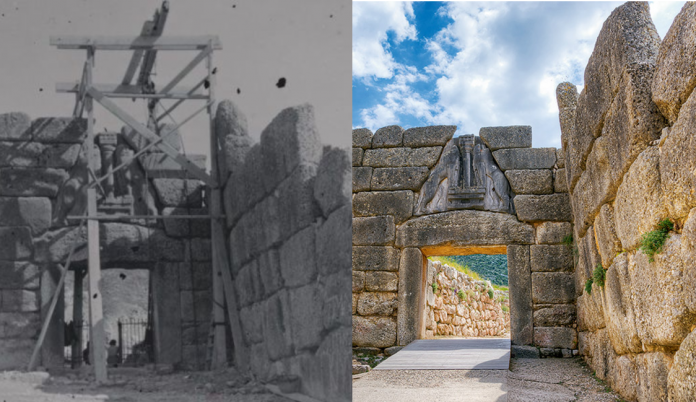 Archives relating to the excavations of one of the most celebrated and famous cities of the ancient world, Mycenae in Greece, have been digitised on the Cambridge Digital Library.

The British School at Athens (BSA) has collaborated with the Cambridge Digital Library to digitise the records of Alan J.B. Wace, who led a number of excavations at the renowned Bronze Age site from 1920 until his death in 1957.

Wace was one of the leading archaeologists of early Greece in the 20th century and spent over a decade travelling and researching new sites while he was a student at the BSA. Above all, he is today remembered for his outstanding work at Mycenae and in Mycenaean archaeology.

He and his team began excavations at Mycenae on 23 April 1920. Their work helped to clarify the chronology of Mycenae’s monuments, especially the sequence of use of areas within the fortification walls. This was an issue that had remained poorly understood ever since the spectacular discoveries made at Mycenae in the 1870s by Heinrich Schliemann and Panagiotis Stamatakis.

Since 2013, the Faculty of Classics has been home to a fascinating collection of photographs, architectural and illustrative drawings, correspondence and original archaeological notebooks, preserving important material from these pioneering excavations.

Mycenae was recognised as a UNESCO World Heritage site in 1999, highlighting the impact the site had and continues to have on European art and literature for more than three millennia.