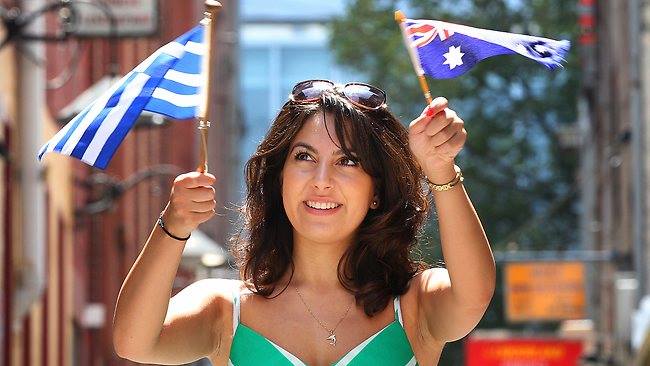 I think Greeks have been to enough Australia Day barbeques to know that true-blue Aussie culture is unrivalled among anywhere in the world. A core value of mateship and the wealth of opportunity the land brings makes it a place all Greeks can safely call home.

While Australia is a special country in its own right, what are the values that make Greeks particularly fall in love with it?

A Greek restaurant in every city

Let’s be real. We all know the first thing we Google when we land in another Australian city is, “are any Greek restaurants nearby?” And more often then not, there usually is.

When vacationing to other parts of Australia, Greek restaurants can sometimes feel like a net of safety. Luckily, rural NSW towns like Woy Woy make sure you can enjoy the comfort of Greek food anywhere in Australia.

For an even richer sense of Greek culture, the aroma of baklava and galaktoboureko on Lonsdale Street in Melbourne makes everyones food senses tingle. Even less populated Australian capitals, like Perth and Darwin, boast over 15 Greek restaurants combined.

Brothers in arms are brothers for life. The Australian value of mateship is one of the most important features of Australia culture. A value that Greeks understood well when they first arrived in the united country.

One of the first things Greeks are taught when they grow up is that family outranks everything. Yet, when they came to Australia they learned that your mates become the newest addition to your family. Greeks have taken this on in all aspects of life, embracing newfound non-Greek friends as those who ‘wish they were Greek’.

Greek beaches vs Australian beaches. To very different experiences, both magical. Greeks may get a a rude awakening when they first arrive in Australia and find out the rough shores of the pacific ocean are a lot tougher than the calm Mediterranean sea.

Despite the change in water current, Australian beaches are some of the most beautiful in the world. Almost 50,000 kilometres of coastline linked by over 10,000 beaches, the crystal white sand is the perfect place to enjoy a nice family picnic.

A part of Australia that Greeks, to this day, remain thankful for. When journeying to Australia’s coastal shores, Greeks had no idea what to expect. What they found was a land filled with opportunity for wealth, happiness and prosperity.

Greeks landed on Australian shores not speaking the language, not understanding the etiquette and not knowing where to go. Yet Greeks didn’t need to speak english to understand they needed to dig their heels in and work harder than Australian locals. It’s from this that Greeks learned the wealth of opportunity that was present in the golden country, earning a newfound respect for a new land they now called home.

Greeks, Italians, Vietnamese, Indians… the list goes on! The one thing that makes Australian culture the most special in the world is the embracement of multiculturalism. Greeks weren’t the first foreign nation to come to Australia, and they certainly aren’t the last. Just as Australians learned to accept Greeks in their community, Greeks pass this tradition on to other arriving communities, embracing the foreign food and language with open arms.

This aspect of Australian culture has similarly opened up new possibilities unforeseen when Greeks first arrived. The Welcome Wall on Sydney’s Darling Harbour recognises the impact Greeks have had on multiculturalism, while Greek community centres ensure this impact continues to grow and prosper.

Share
Facebook
Email
Twitter
Pinterest
Linkedin
WhatsApp
Viber
Print
Previous articleInsight or Perspective: What are our associations doing to keep our language alive?
Next articleGreek special forces team up with US army for first-of-its-kind military exercise