Eurovision 2022: Who is representing Greece, Cyprus and Australia? 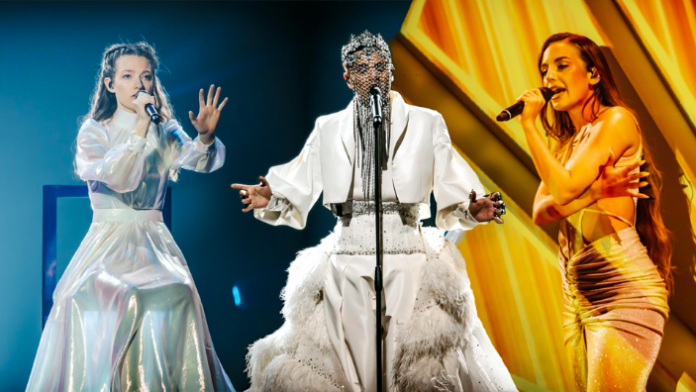 The countdown is officially on for the world’s most wondrously extravagant and politically-pointed singing competition.

At 9 am on Sunday, May 15, Australians will be eagerly standing by as music buff, Myf Warhurst, and comedian, Joel Creasey, announce the winner of the 66th Eurovision Song Contest.

This year, following on Måneskin’s 524 point victory in 2021 with their rock anthem ‘Zitti E Buoni’, the contest will take place in the Italian city of Turin.

The theme is The Sound of Beauty and there are three acts we, and you, should be caring about.

Stepping up to the plate after Stefania’s ‘Last Dance’ earned Greece a spot in the top 10 last year, is Greek Norwegian singer and songwriter, Amanda Georgiadis Tenfjord.

Born to a Greek father and Norwegian mother, the 25-year-old medicine student lived in Ioannina, Greece until she was three years old, before moving to the small town of Tenfjord in Norway, which inspired her stage name.

Amanda will be performing her self-written emotional ballad, ‘Die Together.’

What gradually blossoms into a mid-tempo pop song, ‘Die Together’ delivers catchy melody lines, well-placed harmonies and a driving beat.

The music video was filmed on the Greek island of Symi and was directed by Kostas Karydas who has worked alongside a number of Greece’s music industry giants: Despina Vandi, Sakis Rouvas and Nikos Oikonomopoulos.

In an interview with ESC Norge, Amanda explained the song provides a dramatic description of love.

“I wanted to show that love can be very difficult but also very nice. When you love someone very much, you can do everything for that person, and sacrifice everything just to be together,” she said.

Here’s a peak at Amanda’s performance in rehearsal.

The songstress was first brought to the public’s attention in 2015 when she competed in the second season of The Voice Greece.

The 27-year-old, who is signed to Panik Records, was announced by The Cyprus Broadcasting Corporation on March 9, and will be performing her song ‘Ela.’

The song was co-written by Eurovision writing veteran, Alexander Papaconstantinou, who is credited for Greece’s 2007 entry ‘Yassou Maria’, along with Cyprus’ 2012 entry ‘La La Love’, ‘Fuego’ in 2018 and ‘Replay’ in 2019.

Instrumentally supported by the bouzouki and the Albanian woodwind, and transitioning from English to Greek between the verse and the chorus, ‘Ela’ effortlessly fits the ‘entho-pop’ genre.

Last month, Andromache told Eurovision experts, wiwibloggs, that the song is about “love at first sight.”

“You know the first look you have with somebody you like and the electricity comes into your body, the butterflies in your stomach, you know that crazy feeling? That’s what I’m talking about,” she said.

Andromache reminded wiwibloggs that her name originates from Greek mythology and directly translates to ‘man battler.’ She said her performance will not feature any male backup dancers.

“We don’t need men, only girls allowed,” the singer laughed.

Here’s a peak at Andromache’s performance in rehearsal

Australia: Sheldon Riley – ‘Not The Same’

Now I know what you’re thinking: Why is Australia competing in Eurovision? To you I say, why not?

Australia was first invited to compete in Eurovision in 2015, as part of the 60 years celebrations themed ‘Building Bridges’, and in 2018 three million Australians tuned in to watch the contest.

After winning SBS’ 3rd edition of ‘Eurovision Australia Decides’ in the Gold Coast in February, Australia will be sending reality tv veteran Sheldon Riley to Turin this year.

The singer, most famous for his two seasons on The Voice Australia in 2018 and 2019, will be performing his original song: ‘Not The Same.’

The 23-year-old told wiwibloggs that performing in Eurovision is his “number one dream” and that his song is about unapologetic individuality.

“We’ve all got someone telling us who and what we should be. Being told I wasn’t the same has become the strongest attribute of myself,” he said.

In an interview with the Courier-Mail, Sheldon revealed his competition outfit weighs 50kgs and contains 180,000 Swarovski crystals, 90,000 pearls and is covered in ostrich feathers.

On stage, Sheldon will be sporting a crystal mask crafted by Greek Australian Emmanuel Tsakiris.

Here’s a peak at Sheldon Riley’s performance in rehearsal

This article was written with contributions from Jasmin Kotsapas.