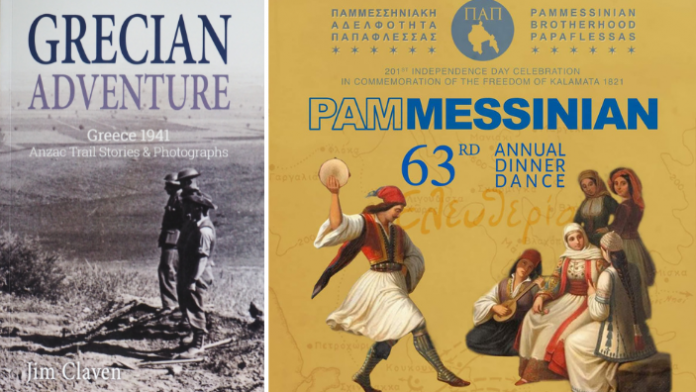 Melbourne’s Papaflessas Pammessinian Brotherhood will hold its 63rd annual dinner dance in honour of the 201st Greek independence and the freedom of Kalamata at Thornbury’s White Rose Receptions on Friday May 27, 2022.

The dinner dance will include music by Tetras and George Athanasakos on Clarinet, with sponsorship by Alex Bros Jewellers. All inclusive tickets are $80.

His new book takes the reader on a journey across Greece in April and May 1941, following the Anzac trail throughout the Greek campaign, from the northern Greek battlefields of Vevi and Servia, through Brallos and Corinth, to Kalamata and the Mani, and on to Crete.

The reader is guided by the individual stories of some of the Australian soldiers who served in that desperate and fateful campaign. The soldiers featured include Private Syd Grant and Sergeant Alfred Huggins, both from Victoria’s Western District, and many more.

A feature of the book is the reproduction of nearly 100 original photographs of Greece during the campaign, from the collections of Syd and Alfred, two collections which Jim assisted both families in their donation to Melbourne’s State Library of Victoria. These amazing images are enhanced with many more taken by Jim Claven as he walked Greece’s Anzac trail over many years.

The book is a feast for the eyes, telling the Greek campaign story in personal terms, in words and pictures. It will be a great addition to the literature of the campaign, a celebration of this important part in the Hellenic link to Australia’s Anzac tradition, following on from the author’s Lemnos and Gallipoli Revealed.

Published by Papaflessas, the publication was supported by the Victorian Government through its Veteran’s Grants program, as well as many Greek-Australian community organisations (including Pammessinian Brotherhood Papaflessas, the Central Pontian Association of Melbourne and Victoria “Pontiaki Estia”, the Lemnos Gallipoli Commemorative Committee and the Agios Dimitrios “Olympou” Philanthropic & Cultural League) along with many individual contributions (including the Grant and Huggins’ families).

All welcome. For bookings go to https://venuedoor.com/event/pammessinian/ or contact Mary on 0422 808 350. Those interested in purchasing a copy of Jim Claven’s book should contact the author at: jimclaven@yahoo.com.au.