An architectural story worth knowing: The Acropolis museum 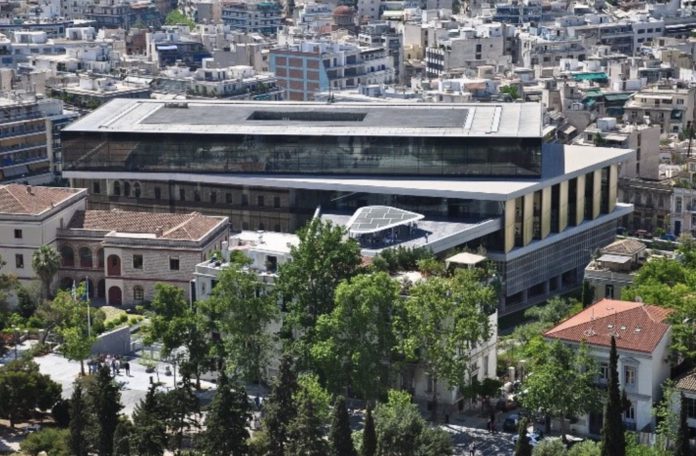 The state-of-the-art museum is constantly rated as one of the best in the world and its designers, builders and operators are justifiably entitled to the kudos that have gone their way.
But amidst all the euphoria, let’s not forget that the museum was seen as the long-awaited catalyst for the return of the Elgin collection of Parthenon Sculptures currently on display in the British Museum. Ten years later, how closer is Greece to reunifying the Parthenon Sculptures?
The need for a museum to display the sculptures and other artefacts, principally from the Parthenon and the Erechtheion, was recognised long ago. The old Acropolis museum – a minimalist stone masonry building – was first opened in 1874 on the south eastern corner of the Acropolis and was modernised in the 1950s. But it was limited by the physical constraints of its location and the desire to build a museum large enough to accommodate all the sculptures and to counter the British argument that the Greeks did not have a suitable museum for the Parthenon Sculptures even if they were ever returned to Athens.

In 1976, the then Greek Prime Minister, Konstantinos Karamanlis, actually suggested the current Makriyianni site as the prime location for a new museum but it took a number of international competitions before a design was chosen that met the main criteria of the competition, that is, securing the best solution for the great architectural and sculpted works of the Acropolis. At the same time, the competition guidelines stipulated that the “envisaged return of the Parthenon pediment marbles (the so-called “Elgin Marbles”) necessitates the creation of corresponding areas for their display”.

From the very beginning, as one historian has noted, the new museum was intended not only to create a modern museum space that related directly to the Scared Rock, but also served as a “political vehicle for the vociferous expression of the request for the return of the Parthenon marbles from the British Museum and a proof that they will take good care in the soil that gave birth to them”.

In the words of noted Spanish architect Santiago Calavatra, the Parthenon is a “present of our ancestors” and a testimony of civilisation which present and future generations have an obligation to honour. This was the architectural and archaeological imperative behind the construction of a new museum that would establish a new visual experience for all of the known surviving sculptures and the Parthenon itself.

After the last competition that was held in 2001/2002, the design that was adjudged by an international panel of architects as being the most appropriate and enlightened proposal was that of the renowned Swiss-American architect and Dean of Columbia University’s Graduate School of Architecture, Planning and Preservation, Bernard Tschumi, and his Greek colleague, Michalis Fotiades. Their design successfully addressed the competition criteria.

It is interesting to note that the runner-up in the completion, a radical avant garde design by the noted architect Daniel Libeskind, failed because it proposed that the Parthenon Sculptures be grouped and displayed as independent works of art. The angular building proposed by the Libeskind team may have architectural merit but the paramount consideration was the display of the Parthenon sculptures.

One of the members of the international judging panel, leading Greek-Australian architect, Nonda Katsalidis, strongly supported the winning entry in terms of its simplicity and clarity. He also commented that the design will “put the Elgin Marbles out in the sunshine, in the light of Attica which has clarity and the strong silhouette light and shade that produces”. The brilliant Attic light also reminds us of observation by the father of modern architecture, Le Corbusier, that the Parthenon affords us the “complete sensation of a profound harmony” of form and light. The Acropolis Museum succeeds in perfecting the harmony of sculpture with light.
Building works were unfortunately delayed for many reasons, not least being the many archaeological finds that were uncovered during on-site excavations and which needed to be carefully preserved, including a large urban settlement dating from Archaic to early Christian Athens, late Roman baths and dwellings.

Whilst the construction was delayed beyond the hoped-for completion date in 2004 (to coincide with the Athens Olympics) the British cultural establishment watched on nervously. For years the British Museum has dreaded this moment in history when an iconic new museum will rise from the ground in Athens. Indeed, on 22 March 1991 the former Keeper of Greek and Roman Antiquities at the British Museum, B M Cook, had sent a memo to the British Museum director warning

The Greeks had also assumed that the new museum would make that case emphatically. As a 2002 report in the Washington Post noted, Greece was building the museum in hopes of reinforcing efforts to change the up-to-now negative stance of the British government and ”shaming the British government into giving back sculptures taken two centuries ago”.

The former Culture Minister in the PASOK Government, Evangelos Venizelos, went further in this statement he made in 2002: the Parthenon Hall in the New Acropolis Museum – once built – would function as an “ongoing challenge and invitation for the Marbles’ return and as a reminder for those who wish to keep the monument in a mutilated condition”.

At the actual unveiling of the museum in 2009 the former Prime Minister Costas Karamanlis said:
“Once the museum is completed, Greece will have a very strong argument for the return of the Parthenon sculptures. We are taking a very important step to finally realise a dream that unites all Greeks.”

Movement – in the view of Bernard Tschumi – is one of the generating factors of architecture. In the Acropolis Museum, the visitor’s route takes the form of a clear three-dimensional loop along a multi-levelled architectural promenade extending from the archaeological excavations to the Parthenon sculptures and back through the Roman period.

The layout of galleries is designed to emphasise the element of time in spatial compositions, in this case reflected by the timeless beauty of the classical sculptures that once adorned the Parthenon temple on the Acropolis in Athens. This experience culminates in the grand Parthenon sculpture hall when the visitor discovers the Panathinaic frieze and the metopes and pedimental sculptures that survived the ravaging by Elgin’s men.

Bernard Tschumi, once remarked that the modern museum will inherit a legacy that “obliges it to reconsider its historical role both as a repository for its collections and as an influential context for the art of its time”. The Acropolis Museum clearly achieves that.

The Parthenon Gallery, with a view to the Sacred Rock

The proximity of the Acropolis Museum to the Sacred Rock, as one commentator has written, provides easy access to the buildings where the sculptures belong. It is an immediate connection, both historically and aesthetically, that serves the “comprehensibility of the total monument, without the interruption of a voyage to another part of the globe”. In other words, to appreciate the monument of all monuments atop the Acropolis in Athens, the visitor should not also have to travel to Bloomsbury in London.

So, as we can see, the Acropolis Museum is and has always been the centrepiece of the campaign for the return of the Parthenon Sculptures. So where are we now?

For a start, the British Museum has not taken a backward step. Over the last decade it has carefully rebranded itself as the universal museum, the “Museum of the Enlightenment”, the “collective memory of mankind”, the “cache of civilisation”, a museum at the “centre of a conversation with the world” and therefore the logical repository for the marbles. Today, it arrogantly describes itself as the “museum of and for the world”.

In April 2018, the British Museum hauled some twelve pedimental sculptures, metopes and parts of the frieze into a separate hall in the museum under the pretext of displaying these works of art with sculptures by the renown French sculptor, Auguste Rodin. In its press release the British Museum stressed that the exhibition “will provide a new opportunity to focus on the Parthenon Sculptures as individual works rather than as part of an ensemble as an obvious counter to the claim that the sculptures are integral to a unique monument.

This followed a similar exhibition – Defining Beauty – in 2015 and the notorious ‘loan’ of the River God Ilissos pedimetal sculpture to the Hermitage Museum in Russia in late 2014.

Whilst Greece may have a new museum in Athens, the British Museum has devised a new political and diplomatic playbook as to how it promotes the Parthenon Sculptures as individual works of art which can be dispersed as the Trustees see fit, with no intention of ever returning the collection to Athens.

Meanwhile, mediation through UNESCO has been rejected. Resolutions made at the UNESCO Intergovernmental Committee on Cultural Property over the last 30 years for negotiations to be undertaken between Greece and Great Britain over the sculptures have been routinely ignored by the British side.

So, while we can justifiably celebrate the tenth anniversary of the Acropolis Museum as a magnificent museum and the unifying element for the Parthenon and its sculptures – the central monument of classical antiquity – as well as other treasures of antiquity from the Sacred Rock, the unfortunate reality is that the opening of the new museum has not proven to be the catalyst for reunification that many had hoped for.

Despite that, I hope to live to see the day when all the known surviving sculptures are reunited from the British Museum and elsewhere, so that the Parthenon Gallery of the Acropolis Museum will become the most famous single room of Classical Greek art in the world.

Only then will the Greek Stones be allowed to speak for themselves.

George Vardas
Vice-Chair, Australians for the Return of the Parthenon Sculptures

Share
Facebook
Email
Twitter
Pinterest
Linkedin
WhatsApp
Viber
Print
Previous article13 million Euro allocated to protect Delos and Daphni
Next articleMary Zournazi: “The love of the city and its people and a love of the animal”