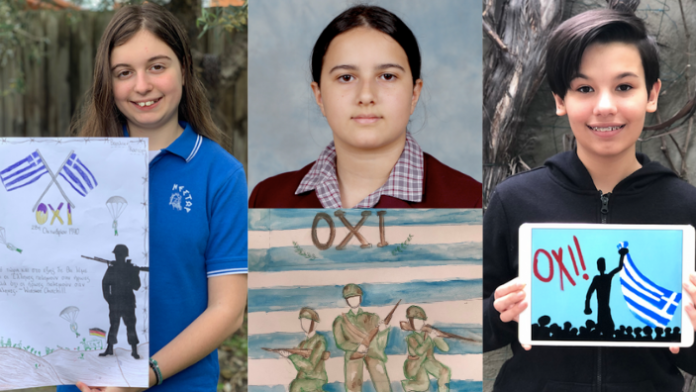 80 years have passed since the outbreak of the Greek-Italian war. Greece responded immediately to Italy’s aggressive action.

Some fought bravely in the mountains of Albania, while others gave their best in the background to organise the war. All the Greeks, however, surpassed themselves.

The Greek-Italian war of 1940-1941 became history. An example to imitate. It inspired many and became a source of creation and continues to inspire Greeks. The events of 1940 live in the hearts of all of us, no matter how far we are from home.

The editorial team of The Greek Herald thanks the more than 50 young people, aged 10 to 17, who participated in our competition for October 28 and congratulates their parents and grandparents, who pass on their love for the homeland.

Vasiliki Kastora from Nestoras College was the winner of our Year 5-6 category, submitting a beautiful hand-drawn artwork which clearly portrays her pride in her Greek heritage. The Greek flags, as well as the quote by Winston Churchill saying “heroes fight like Greeks,” made her entry a standout.

“On October 28, we celebrate the liberation of Greece from the Italians and Germans during the war of 1940. As a Greek, I am proud of all those who fought like heroes, and this sacrifice remains in our history today,” Vasiliki tells The Greek Herald.

“Let us never forget the day of “NO,” when Greece gave hope to the whole world and that gives me great joy.”

Georgia Christofi from Oakleigh Grammar School was the winner of our Year 7 -9 category, after she submitted a hand-painted artwork showcasing the Greek flag and soldiers preparing for battle.

The Hellenic Culture Coordinator at Oakleigh Grammar, Natasha Spanos, says students from the school were “excited” to take part in the competition to “express themselves and understand Greek history and culture better.”

“This competition gave the students the opportunity to identify what we celebrate on the 28th of October and express it in their own way,” Ms Spanos tells The Greek Herald.

Elektra Cadzow took home the prize for the Year 10-12 category, with a striking image of a man holding the Greek flag proudly, while the word ‘OXI’ stands out in the left hand corner.

“OXI day means to me celebrating the Greek people’s resolve for standing up for what’s right and empowering the people,” Elektra says.

“Thank you for the opportunity, I’m so excited that you chose my picture. My yiayia and pappou will be so happy.”