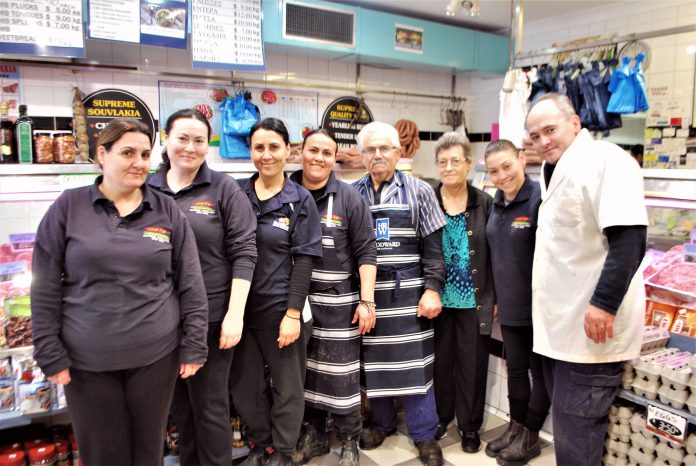 A recurring comment I hear throughout “Vasili’s Taxidi” is hearing several times how a small shop may actually be an extremely busy one. Yes, it may look small from the outside but this is only the facade of something a lot greater.

The cliché of “never judge a book by its cover” is true when you look at one of Sydney’s Greek ‘institutions’, “Supreme Souvlakia Meat and Poultry Wholesalers”, in Belmore, or the way everyone knows it as, “Supreme Souvlakia”. Throughout the year, and especially Saturday mornings, there is always a queue in the shop; it is definitely a very busy shop but, after interviewing Supreme’s owner, Giorgos Anastopoulos, I witnessed first-hand why there is so much more to this incredibly busy shop.

Giorgos migrated to Australia in 1965; the following year, he married his fiancé, Sotiria, and, over the years they would have six children. His first jobs were in local factories but then he landed a job in “Sylvester’s Smallgoods” in Redfern, where he gained his first experiences in the meat industry.

After four years there, he found work at “Belmore Smallgoods” and worked there for four years too. George also worked at “Olympic Delicatessen and Butchery” in Bankstown.

All these years, he gained invaluable experience and knowledge about the meat industry. His first business opportunity was surprisingly a takeaway shop on King Georges Road, Wiley Park. With his children growing and having the foresight of establishing a business they could work in, he leased another shop- a few doors down from the takeaway shop- and established a butcher shop, which specialised in souvlakia.

At the time, Greek households used to make up their own souvlakia, so why would they buy ready-made ones? As Giorgos explains the innovation, “For Greeks, souvlakia are such a popular dish. At the time, Greeks still bought legs of lamb, for instance, and cut it up to make their own souvlakia. But clubs and shops also wanted souvlakia, and they did not have the time to make up hundreds of souvlakia. I just thought, ‘If souvlakia are so popular, why not make and sell them?’ For us, it was our business; so we passed the meats onto the souvlaki sticks… all by hand! And our business really took off!”

Other butcher shops may have begun making up and selling souvlakia, but it was “Supreme Souvlakia” that took it to another level… souvlakia entered mainstream Australian cuisines on a mass scale.

Whether it was sending samples all over New South Wales and media promotion, or the word of mouth about his high quality souvlakia, business boomed and George set up a small factory, to produce souvlakia, at the rear of premises he owned in Belmore. In 1998, the factory was expanded to include the shop and Supreme Souvlakia has never looked back and the business continues to grow. As I have to point out, “Who does not know of ‘Supreme Souvlakia’?”

However, there is so much more to “Supreme Souvlakia Meat and Poultry Wholesalers”; beyond the sho window and counter is a major operation with the Anastopoulos family owning several farms across NSW, with their own livestock! And you have to love about the Anastopoulos family is the way these farms all have Greek names: for instance, St George (Frogmore), Anastvale (Goulburn), Sotiria (Cowra) and Anapolis (Barmedman).

The Anastopoulos family have to deal with their farms’ managers and Georges’ son, Philipas, transports their livestock to the local abattoirs. As Philipas humbly points out, “This is like a giant jigsaw puzzle and we try to piece it together. There are times when all the pieces fall into place and there are other times when a couple of pieces are missing. All we can do is our best…”

One challenge that arises in rural NSW is impact of drought in managing some of Anastopoulos farms. As Giorgos explains, “One time, it did not rain for an entire year, so we hired a ‘stockman’ to move our livestock to our farm in Quiandella. It took him one-and-a-half months to move four hundred cattle.”

What I love about “Supreme Souvlakia”, and its success, is how it has impacted on Australian society and Giorgos has a humorous story about how he used to correct customers who came into the butchery and asked for kebabs, “I would ask them, ‘What is this kebab?’ and then teach them to call them ‘souvlakia’”. It may sound funny but underlying this is how Greek shops and businesses have changed Australian perceptions about things, even if it is as simple as a souvlaki.

The story of “Supreme Souvlakia Meat and Poultry Wholesalers” was featured in Vasili’s book, “Beyond the Shop Windows and Counters”.