Vasili’s Taxidi: All in the Family with the Award-Winning The Brothers Fish Market 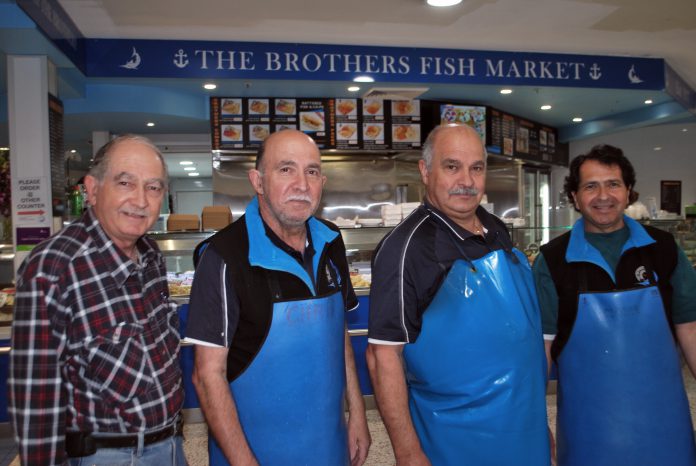 One inspiring aspect of family business is how a family comes together and strives, as one, towards their success. What is also amazing is how a family remains together in a business, despite so many years passing and the family itself growing… it highlights a very special bond among family members!

Travelling to Seven Hills, The Brothers Fish Market epitomises what can be achieved when a family strives together; upon arrival at the fish market, what immediately grabs your attention is that all four Klavdiou brothers, Giorgos, Christos, Kostas and Mario all work there! Additionally, their wives and some of their children, all work there too!

The Klavdiou family are from Vatili, Cyprus; after the Turkish invasion of Cyprus in 1974, their village came under Turkish occupation and, like thousands of Cypriots, became refugees and fled to free Cyprus. Parents, Haralambos and Chrystalla, and their four sons, George, Christos, Kostas and Mario, are then sponsored, by Haralambos’ older brother, Kostas, to migrate to Australia.

As most of Haralambos’ family had migrated to Australia in the late 1940s- 1950, they fortunately had a strong family network that supported their arrival to Australia, in 1976, by finding them accommodation and, with the exception of Mario who attended Granville Boys High School, Haralambos and his three sons worked at various seafood shops- owned by his brothers.

As Kostas explains, ‘All our father’s brothers had fish shops: Kosta (Auburn), Andrew (Belfield), Nikos (Eastwood), Tasos (Liverpool)… Chris worked in Harry and Eleni Dimitriou’s fish shop in Bankstown, while I worked in ‘Jack’ and Rita’s shop in Granville. Uncle ‘Jack’ helped us greatly; he had a stall, selling fish, at Flemington Markets and he kindly gave it to our family; our father and brother George worked this stall. Mario would work there on weekends.’

Settling in Seven Hills, the Klavdiou family found an opportunity to open a seafood shop in Seven Hills Plaza in 1977; at the time, Haralambos and his sons, George, Chris and Kosta, were partners. Kostas recalls the opening day of The Brothers Fish Market, ‘We opened our shop on July 27, 1977, on the feast day of Agios Pandeleimonas. I remember our mother brought an icon of the Virgin Mary, which she had brought over from Cyprus, and placed it in the shop and said that the Virgin Mary would help us. We still have that icon in our shop today!’

As there were very few good seafood shops in the area, The Brothers Fish Market immediately boomed with success and it never not looked back since. When Haralambos retired, Mario took over his father’s share. Since 2005, Kostas and his son, Harry, own the business. Despite these changes, all four brothers, and their families, still work side by side.

There is no doubt the strong family values instilled in the four brothers come from parents, Haralambos and Chrystalla, as Kostas points out, ‘This strong sense of family values are reinforced by our mother too. After work, we would all go to our family home and there would be a meal ready for us. It may have been 9pm but we always came together. Even today, our father will drop off some food (at the shop) that our mother has cooked for us. Our mother continues to send food to our homes; this gesture is just her loving nature…’

All the brothers get asked how they have stayed together after forty years. As Kostas explains, ‘We are a very close family and this love and care for each other was instilled in us from a young age. Our maternal grandfather, Kostas Papakostas, who was a priest, would always invite us children together; he would pick up a cane and ask us to break it and we would. Then, he would add another and another, and the bundle of cane would become more and more difficult to break, until we could not break it. It was our grandfather’s way of telling us to stay together- no matter where we go. He was a very wise man; he would advise us to have a clear mind and to love one another.’

Being so close-knit and supportive of each other, it is no wonder the Klavdiou family treats their customers as an extension of their own family, ‘Seven Hills is like a large village- everyone knows each other. We have three generations of families who continued shopping from us. After all these years here, at Seven Hills, this is our home- we are part of this community.’