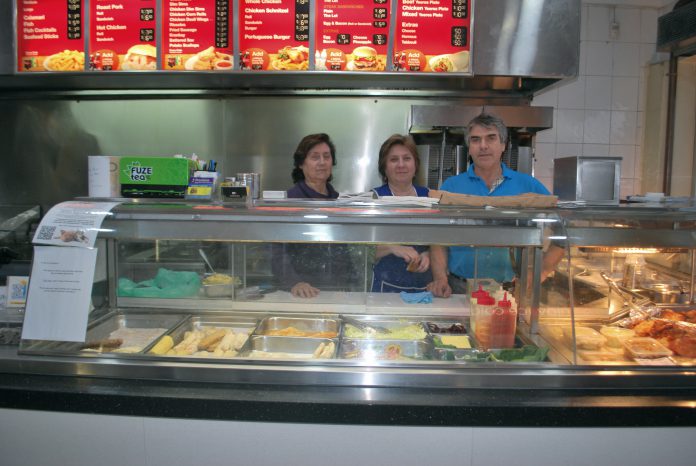 Over time, our favourite shops become so familiar that we imagine they have always been there. We drive past the shop and look towards it with the expectation that it is there. And this is why the longevity of any shop or business to a local area is so important to the community itself; such shops and businesses become part of a community’s growth and development, as well as its identity!

George’s Takeaway is just one of those shops whose longevity and success is an integral of Padstow’ history; since 1970, fifty one years in June, this second- generation business has been serving the local community and the locals just love the place.

After Theodore and Georgia (nee: Vasilangos), ran shops such as a fish and chips shop in Regent Park and in partnership at the Central Cafe, Sydney, an opportunity arose in Padstow, where they could buy a run-down shop- with residence. What attracted the Theodore and Georgia to buy this shop were the people, as Georgia remembers, “They were very down-to-earth and nice to us. Back then, Padstow had lots of young people around- lots of young families. We had a young family too.”

In a humorous development, Theodore and Georgia named the shop, “George’s Takeaway” instead of Theodore, and Georgia recalls how this happened, “When we opened the shop for trading, the locals found the name, Theo, too alien and began calling my husband, George, as it is such a Greek name- like Nikos, Chris and john. People would greet him as George, so we called the shop, George’s Hot Food Takeaway. Over the years, my husband  responds to customers calling him, George.”

“George’s Takeaway” was opened on Friday, July 26, 1970, and Georgia remembers the takings for the day were a meagre $78! That did not dishearten them because they realised everything was long term and hoped to win over the local community. Whether it was the wholesome and tasty food they cooked or their understanding and good customer service, Theodore and Georgia were a dynamic that did win everyone over, “Our business grew and grew! The busier we got, the more we extended our times for trading; we went for a 9pm finish, to 10pm, then to 11pm, then to 12am… until we reached 2am. I did not mind the 2am finishes because our children were already asleep and we just kept on working. Saturdays were our busiest night! It was convenient that our residence was on the premises.”

Despite being so busy, only Theodore and Georgia ran the shop; they were certainly a dynamic duo, “At our peak, we were cooking 100 dozen meat patties for hamburgers a week and over 150 pieces of fish on a Friday. Theo and I made a good team; we had the same dreams and hopes… we were on the same page. We wanted to work hard and provide the best opportunity for our children.”

Asked the secret behind the success of their takeaway shop and she will emphasise the need for shopowners to put all their efforts to providing a great product and sincerely taking care of their customers.

Despite being tempted to sell the shop after their children, Angela and Nikos, grew up, took their career paths,  and married, they decided to working their business, “We thought about retiring or doing something else. However, this shop was part of our lives; whatever happiness (in life) we achieved, it was through this shop. Today, my heart is still in this shop… “

These days, Georgia’s daughter, Angela, and her husband Meletis (Hatzis) run the shop and Georgia still helps around the shop; having practically grown up in “George’s Takeaway”, Angela has seen all the changes in the local area and people’s tastes, “With takeaway shops, you have to move with the times! People’s tastes change and customers are always looking for something different. For a small example, when our family first opened the shop, we only used tomato sauce; then barbeque sauce was popular and these days, we have all sorts of sauces, whether sweet chilli, tzatziki, peri peri and mayonnaise. For any successful business, you have to adjust according to a developing market.”

What makes the Greek-owned takeaway shops is the way they gradually introduced Greek foods to their menu, “My mother cooks up lots of Greek food and customers cannot get enough. One day, she cooked up pastitsio and our customers did not know what it was; I tried to explain what it was and they still could not understand so I just said it was Greek-style lasagne. They love our pastitsio! Our customers also love our ριζόγαλο (rice pudding) and moussaka. This shows just how far Australia has come in multiculturalism; Australians eat all sorts of foods from around the world!”

The takeaway shop of 1970 has definitely changed, but so has Australia; for Angela, Meleti and Georgia, they regard “George’s Takeaway” as a home away from home for so many customers and themselves.

“George’s Takeaway” was featured in Vasili’s book, “Beyond the Shop Windows and Counters”