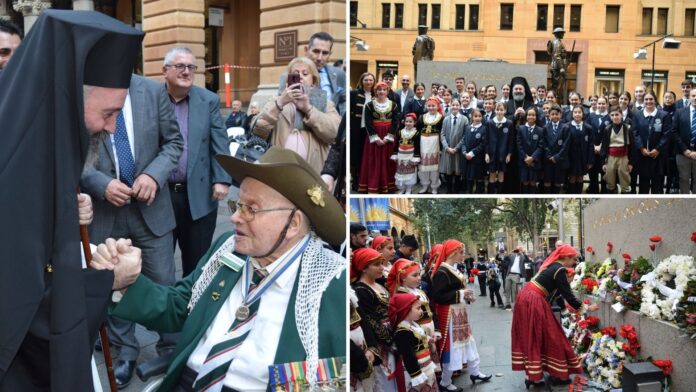 A special ceremony was held at the Martin Place epitaph in Sydney’s CBD on Saturday to commemorate 80 years since the Battle of Crete.

The ceremony was attended by Battle of Crete war veterans, descendants, Members of Parliament and Greek Community leaders as they remembered the Greek, Australian, British and New Zealand troops who desperately tried defending Greece against a huge German airborne assault on May 20, 1941.

“Australians remember that battle, and we too draw strength from that courage, an example of those who have done so much to bring freedom,” David Elliott said on behalf of the Prime Minister.

“In the aftermath of a battle fought with honour, and conceded without disgrace, a deep friendship was forged.”

Messages for the anniversary from Konstantinos Floros, Chief of the Hellenic National Defence General Staff, and Prof. John Chrysoulakis, Secretary General for Public Diplomacy and Greeks Abroad, were played on a screen.

“As we commemorate this anniversary, we also celebrate the warm friendship between Greece and Australia,” Christos Karras said.

“…We celebrate our foreign values which bind us together as great friends.”

A notable guest for the ceremony was 104-year-old Alf Carpenter; One of Australia’s oldest surviving Anzacs and Battle of Crete survivor. Carpenter said The Ode in English, accompanied by Greek RSL President Peter Tsigounis who said the Ode in Greek, before he was assisted in placing a wreath onto the epitaph. Meeting with the Archbishop following the ceremony, the two briefly exchanged thoughts on the unique landscape of the island.

“United in war, we are often united in peace. These principles and ideals are as relevant today… as we pursuit a peaceful co-existence in a multicultural society, with a shared respect for our cultural diversity,” Archbishop Makarios said in his speech.

Students of St Spyridon, All Saints Grammar and St Euphemia all represented their schools with honour, also joining children from the Cretan Association of NSW in laying flowers on the epitaph.