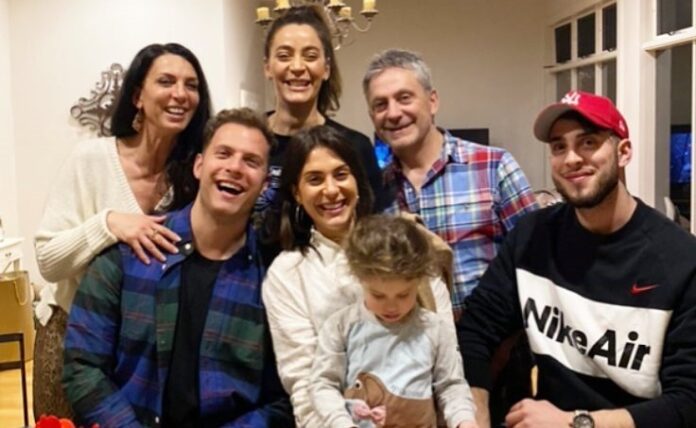 Christian, Elana and Andrew Pandelides are three peas in a pod. They were inseparable until three years ago in 2017, when Christian decided to leave Melbourne for New York to work as a graphic designer.

Their mum, Kathy Pandelides, tells The Greek Herald that although they would all visit each other over the years, it wasn’t until the coronavirus pandemic struck that all three of her children were back living in the same city, under the same roof.

Not to mention celebrating their 27th birthday together for the first time in three years!

“We’re in lockdown here in Melbourne so we organised seafood to come in, cookies and cake. We made sugar syrup and we made our own cocktails,” Kathy says.

“In the background, we had videos of Greek islands and music playing loudly so we could all pretend that we were anywhere but cold, freezing Melbourne. It was a bit of normality in all the madness.”

The celebratory moment didn’t come without its challenges however.

When Christian first arrived in Australia, he was impacted by the newly imposed stage three coronavirus restrictions. His flight diverted to Perth, where he quarantined for two weeks, before being allowed entry into Melbourne.

“It was a huge relief when he finally came home. My mother lives in Airport West, so I picked him up from the airport and drove past her house and we stood in the front yard and just waved to yiayia. But he hasn’t seen anyone else from the family yet,” Kathy says.

Kathy, who also has an older daughter named Kaela and grand daughter called Eva, adds that at the end of the day none of that mattered as long as they could all be together.

“Has the lockdown brought us closer together? You know, they were always out with their friends, but what has happened now is we all sit down together on the couch, we all sit down and have meals together,” Kathy explains with a laugh.

“So even though we are a close family, it’s brought us even closer together.”