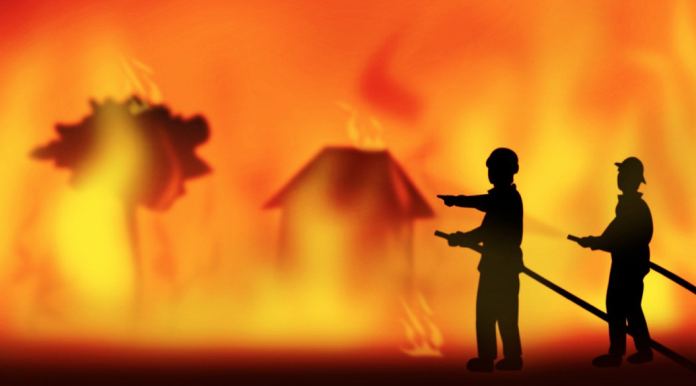 Experts speak to The Greek Herald about the unprecedented tragedy that no one was prepared for.

The summertime fantasy of a surfy Australia soaking up the suns warmth has been overcast with a dark dystopian cloud, as unprecedented bushfires continue to spread across the country. 27 people have lost their lives to date, over half a billion animals have died, and land that equates to twice the size of Belgium, or one third of Greece, has been burnt.

The Greek Herald spoke to a number of scientific experts, seeking answers to the questions that our governments and leaders are all avoiding:

Are the fires a result of climate change? Could there be better preparation? What will the long-term health effects be, and how can I better protect myself from fires this season?

“These fires are unusual for three main reasons,” begins the Associate Professor at the UNSW Canberra School of Science.

“Firstly, they have been burning earlier in our fire season which usually runs from October to March, with the worst activity in southeast Australia occurring in January and February. This year the fires started burning in late August/early September, and burnt intensely through November and December.”

“Secondly, the area they have burnt is unprecedented, and many of the fires have made multiple runs over a long period of time as recurrent bad fire weather (hot, dry and windy conditions) in combination with extreme drought conditions, have been causing catastrophic fire behaviour almost on a weekly cycle. The temperatures we have been experiencing have also been record breaking,” says Dr Sharples.

“Thirdly, fires have evolved many times into fiery storms – far more than we have seen in previous times.” These are the elements that make up, according to the Professor, the anatomy of a tragedy, for which many believe climate change is responsible.

“My view is that there is a climate change signature in these fires. To properly answer this question will take some more work involving attribution analysis (where the influence of climate change to a particular event is quantified), but I strongly suspect that the temperatures we have experienced, which effects the flammability of the vegetation, would have been unlikely to have been so high in the absence of anthropogenic global warming. The drought may have a climate change signature as well, but this is much harder to determine,” said Dr Sharples.

The fires have sparked backlash from Australians in regards to government leadership. Last Friday, thousands of people gathered in Australia’s major cities – Sydney, Melbourne, Brisbane, Adelaide and Canberra – to protest the resignation of Prime Minister Scott Morrison. Many of these outcries were associated with Morrison’s continued dismissal of climate change, as the country burns.

“Accepting that climate change played a role in these fires, the time for government to have done anything about that aspect of the fires was 20 years ago – unfortunately that opportunity was not embraced. Moving on from these events, I think there is a real need for us to better understand the dynamics of extreme wildfires, which should be viewed as quite distinct from typical forest fires that burn under milder conditions. Dealing with them operationally requires new ways of thinking, and mitigating their impacts requires a more wholistic approach to understanding how we manage the country, and how and where we live in an increasingly flammable landscape. Looking into the future, there needs to be more definitive climate action – what we do now won’t affect these fires, or even fires 5 years from now, but it may help prevent experiencing even worse disasters 30 years from now. Unfortunately our government doesn’t seem to fully appreciate this point,” says Dr Sharples.

The Professor anticipates the fires will continue until the country is hit with substantial rain, which is not forecasted until March 2020.

The wildfires in Australia have infiltrated the air quality for months, which means Australians need to be further aware of the potential health problems associated with breathing unhealthy air.

The Greek Herald spoke to University of Technology Sydney Professor Brian Oliver, who recently interviewed with BBC regarding the health impacts of bad air quality. The Professor is also part of a research project developing new ways to treat respiratory issues.

“The risks differ according to how close to the fire you are, and if your some distance away (e.g. in Marrickville) how thick the smoke haze is.  In general the immediate effects for everyone could be coughing, sore eyes, throats, but for people with respiratory diseases like asthma they might end up in hospital with breathing difficulties. The smoke can travel for hundreds of km, even from one country to the next,” says the Professor.

Health impacts of the bushfires

Professor Oliver believes there are two population groups who are particularly at risk. “The two conditions that we worry most about are respiratory and cardiovascular conditions, as when there is smoke haze it is common for more people to attend hospital due to worsening of these conditions.”

When it comes to precautions against worsening health conditions, Professor Oliver believes people should “avoid the smoke haze as much as possible”. This also means avoiding outdoor exercise. When it comes to masks, he believes surgical masks “offer no protection” unless “if the masks are good and fitted by an expert they will offer some protection”.

When it comes to the scientific and statistical understanding of the impact of bushfires on respiratory health, Professor Oliver believes this information will not be available for a long time.

“This depends upon how quickly we can see the health effects.  In generally we are talking a minimum of decades,” he said.

Professor Costas Synolakis became familiar to Greeks during the wildfires that broke out in Mati in 2018, where he was a called upon crisis management expert.

The internationally renowned academic has been painfully watching the events unfolding in Australia for months, he tells The Greek Herald.

“What you are living in Australia does not look like it has happened before, at least in California or the Mediterranean countries. It is an unprecedented situation, but it seems that we should have foreseen it. Many who estimated the impact of climate change are reminiscent of what is happening in Australia, but unfortunately, most scientists have not evaluated it properly,” says Professor Synolakis.

Climate change cannot be named the cause for many decades

The Australian government have shied away from the climate change debate during this unprecedented bushfire tragedy. Profesor Synolakis believes there will be no way of knowing whether the fires are the result of climate change for many decades.

“The debate you are reporting is wrong,” Professor Synolakis explains. “We cannot yet know what the extreme weather events caused by the fires are. We know that what is happening is compatible with many forecasts of the effects of climate change. But we will not know the answer accurately for many decades. That is why we need to prepare for the worst,” he said.

Preparing for the worst

Having experienced both the fires in California and the fires in Greece, Professor Synolakis believes there is no way one can absolutely prepare for a situation of such a scale, especially with the uncertainty of climate change.

“The easiest answer is to tell you that yes, fire preparation could be better. Of course it could, but, think about it, no country can be prepared for all the extreme phenomena that can ever occur, especially with the uncertainty of climate change. Preparation in Australia is much better than in Greece….”

“There has been much debate in Australia about whether it is better to massively evacuate people immediately or, if, in some cases, residents can stay and cope with the fire in their homes. This has affected crisis management. I cannot tell you what is most effective, but it certainly requires a unified strategy and proportionate preparation – as we have observed in California, that the slightest doubt or delay in managing the fire develops at the expense of many residents.”

Bushfires and wildfires are not expected to reduce any time soon, which means we must consider how to better protect ourselves for the future. Professor Synolakis calls upon examples from Greece, California and Australia regarding better preparation for bushfires.

“The best practice is to not always try to deal with the immediately preceding fire – they are never the same. In Australia, crisis management in general has set the example in the wildfires in Victoria, and in California, the wildfires in Oakland. No fire, like any earthquake, is an exact replica of a previous iteration of the same phenomenon. The practice of preparing for the future to deal with the extreme phenomenon we have just faced is, I insist, wrong,” says Professor Synolakis.

“The fire that is still unfolding in Australia shows us that there are extreme phenomena that we cannot yet foresee with precision. This means that we must plan our defence in such situations in light of the most extreme phenomenon that we should reasonably expect. Hundreds of millions of dollars have been spent worldwide to make theoretical estimates of the probability of a given fire, that is, to conclude that such a fire occurs every 300 years….For the government of a country where such a phenomenon is extreme, it does not need to be included in the annual preparation, as if happens every 300 years. But for the citizens, when they live, they don’t care if it happens every 10 or 300 or 1000 years, they get the impact now and ask for answers about improper preparation, if you ask me,” he said.

“For this reason, we should not deal with extreme phenomena with probabilities – I am not referring to meteor falls or volcanoes – but always calculating what is the most serious that can happen to us and considering whether we are sufficiently prepared. If we remain captive to the chances of contingency planning from our political preparation it is as if we are relying on mantis or those reading tarot decks.”