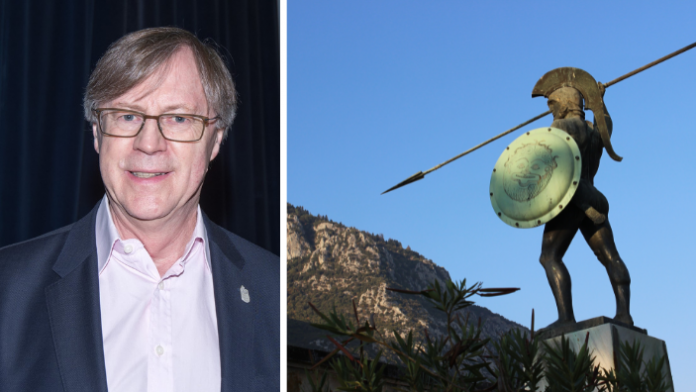 Professor Paul Cartledge will present an online lecture entitled Ancient Sparta: Myths versus Reality on Thursday, April 7 at 7pm, as part of the Greek History and Culture Seminars offered by the Greek Community of Melbourne.

The ancient Spartans have given us three words in our English language (spoiler alert: ‘spartan,’ ‘laconic,’ ‘helot’).

That’s a tribute to the Spartan myth – which was started in antiquity by the Spartans themselves, then taken up by pro-Spartan ‘lakonizers,’ and has continued to this day (‘Spartans’ on the US Capitol, ‘Spartans’ in the UK House of Commons). But what was the ‘reality’ of ancient Sparta?

Prof Cartledge has the answer for those who attend the seminar.

Who is Prof Cartledge?

Professor Paul Cartledge is the AG Leventis Senior Research Fellow of Clare College, and formerly the inaugural AG Leventis Professor of Greek Culture in the University of Cambridge.

He is the author, co-author, editor or co-editor of some 30 books, most recently Democracy: A Life (Oxford University Press, 2018) and Thebes: the forgotten city of ancient Greece (Picador & Abrams, 2020).

Cartledge’s field of study is Athens and Sparta in the Classical Age, he has been described as a Laconophile. He was chief historical consultant for the BBC TV series The Greeks and the Channel 4 series The Spartans, presented by Bettany Hughes.