Paul Kapeleris: 22-year-old overthrows loss of vision to be fast-tracked to semi-finals of Australia’s Got Talent 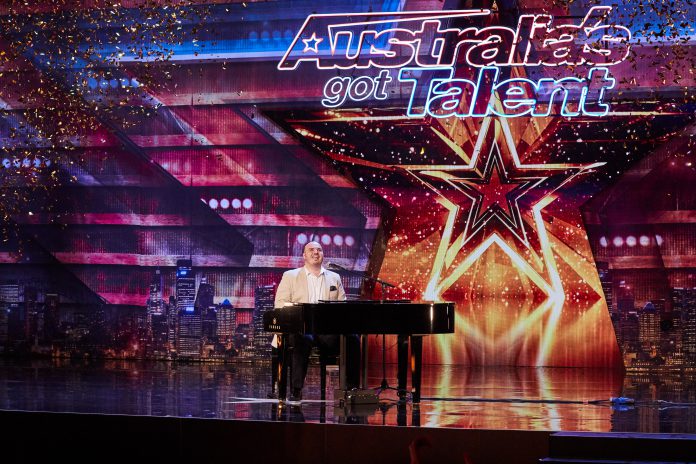 The Australia’s Got Talent contestant talks about creating your own light in darkness, the importance of family, and his great appreciation for pita.

“I want to show people that no matter who you are, no matter what you’re struggling with, you’ve got something that people need to hear. Everyone’s got their own thing going on that could be interesting to other people,” said Paul Kapeleris.

He delivered the performance that brought all 4 judges to tears. With former Pussycat Doll, Nicole Scherzinger saying, “I’m crying my face off right now!”, in between sobs.

Paul’s audition has been promoted as “the performance that Australia will never forget”.

When I asked Paul how he felt about that statement, his extremely humble personality took charge, as he joked, “honestly, I think Australia can do better!”

Paul Kapeleris was born in Concord, Sydney, to a “huge” Greek family from Sparta. He credits his family’s ongoing love and support for his achievements.

“Everyone’s just overall very supportive. It’s been really lovely, and a source of inspiration to me that so many people love me and care about me and what I do,” he said.

Paul’s ambition and positive mindset were clear from the start, after he was born with a serious vision impediment that progressively worsened throughout his life. He currently has 5% vision and lives almost constantly in darkness.

“If I’m in a place where I’m comfortable…like I’m at home, or at school, or at uni, or a street I’ve been down a few times before, I can kind of make a mental map quite easily…I try to be independent but there are just things, like I’m still learning, I’m learning every day, and helping someone who needs it is always a good thing,” he said.

This has not stopped him from surpassing most achievements of people his age. At 22, he has completed a Bachelor of Arts, majoring in Music, at Macquarie University, has been accepted into the Masters program, written and performed his own music, and, of course, is about to bring Australia to a stand-still on Australia’s Got Talent.

“Since I was 16 or 17, I had the idea in my head that I’d do it…I was grappling with accepting that anything could happen, and the worst can happen, for a few years. I’ve finished my degree, I’ve got some time, if I don’t do it now, I’m not going to do it. So I finally knuckled down and auditioned,” said Paul of his auditioning for the show.

Paul got involved with music at a very young age, after a drummer visited his pre-school and noticed Paul place his hand against a snare drum to feel the vibrations of the instrument.

“The drummer told one of the teachers, ‘keep an eye on him, he’s going to be very musical’,” he said.

When he was 4, his parents bought him his first keyboard. He began piano lessons at 8-years-old, and singing lessons when he was 17.

“When I was learning, my teacher encouraged me to close my eyes and look away the entire time…cause my vision was slightly better than what it is now. She said, ‘you’re not going to have that forever, what happens when that goes away?’ So I practiced piano with my eyes closed, and I had to learn where the notes were on the piano, just by feeling,” said Paul.

He credits his condition for allowing him to have a more intimate, personal relationship with music.

“I think it allows me to feel it a lot more. I don’t get bogged down by trying to read sheet music or trying to remember exactly how it goes. I play stuff in my own way. So when I learn something I learn it by ear, and I play for me every time,” he said.

Paul channels his lack of sight into a positive experience that allows him to strengthen his other senses, particularly his ears, which have given him a special connection to musical entertainment.

“When I watch TV shows or movies, I feel like I’m missing out on some of the experience, because I can’t see it very well. But with music you just have to hear it, so I really feel a sense of achievement and connection with music because I’m not missing out on any of the meaning. So I love music for that reason. I can hear it perfect and I can experience all of it,” he said.

Paul is on the brink of becoming a household name in Australia. While he refuses to gloat, he is prepared to use the platform he is given to inspire others.

“I want to be remembered for being someone that despite their vision impairment has made the most of their life, and has done everything they could to maximise the opportunities they’ve been given. I’m just really grateful for the reaction I got from the show, and just that everyone is so supportive, and loving and willing to help someone out,” said Paul.

Lastly, Paul wanted to tribute his “huge”, supportive Greek family for their constant support throughout his life, and with his music. His favourite part of Greece is the beaches and the laid back lifestyle. While his favourite part of New Years, is the ‘vasilopita’.

“I have a never ending supply of pita in my house!”, he laughs.

Good luck Paul! There’s no doubt this year’s vasilopita coin will be entirely in your favour.