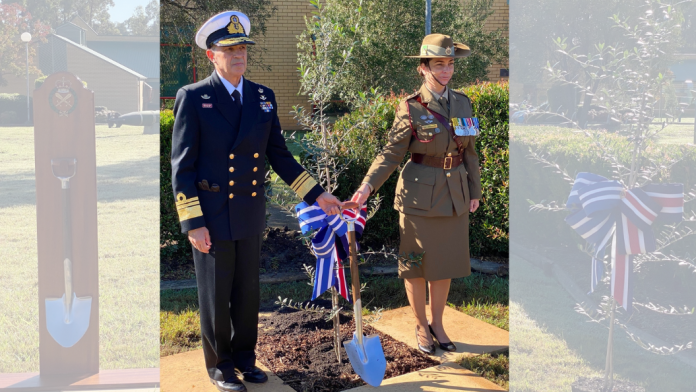 A ceremonial olive tree was planted at Lamia Barracks in Sydney on May 16 as a way to honour the 81st anniversary of the Battle of Crete this year.

The tree planting ceremony is organised annually by the Joint Committee for the Commemoration of the Battle of Crete and the Greek Campaign.

Both Vice Admiral Drymousis and Lieutenant Colonel Broder gave small speeches to those in attendance.

This included the Head of the 1st Department Public Relations Directorate Squadron, Colonel (AF) Miltiadis Militsis; the military attaché from Canberra, Colonel Ioannis Fassianos; the Vice Governors of Crete, Maria Lioni and Kostas Fassoulakis; the Consul General of Greece in Sydney, Christos Karras; the Secretary of the Joint Committee, Nick Andriotakis; and the President of the Cretan Association of Sydney & NSW, Terry Saviolakis, among many others.

In her speech, Ms Broder welcomed everyone to the Barracks and expressed her hope that the olive tree “will continue to provide shade” for the military personnel who train at the facility.

In his speech, Mr Drymousis thanked Ms Broder for her hospitality and spoke about the enduring connection and relationship between Greece and Australia even after the end of WWII.

At the conclusion of these official proceedings, the attendees moved on to enjoy a small morning tea and watch a gift exchange between Mr Drymousis and Ms Broder, as well as the two Vice Governors of Crete.

“It was a great morning,” the President of the Cretan Association of Sydney & NSW, Mr Saviolakis, told The Greek Herald after the event.

“The annual visit to Lamia Barracks is important because it celebrates the connection between Greece and Australia and it has been conducted since the early 2000s by visiting officers from the Greek armed forces that come to commemorate the Battle of Crete.”