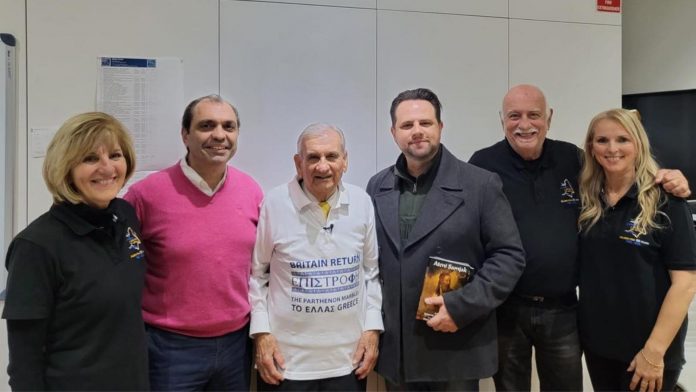 Emanuel J Comino AM, President of the International Organising Committee-Australia-For the Restitution of the Parthenon Marbles, presented a lecture on Tuesday night that we hopes will be repeated.

The Kytherian Association of Australia (KAA) hosted the lecture at Kythera House in the Sydney suburb of Rockdale.

The lecture was attended by over 60 people including a number of dignitaries and distinguished guests such as the Consul General of Greece in Sydney, Christos Karras, and the Host of TV show My Greek Odyssey, Peter Maneas.

Mr Comino took those in attendance on a journey through time from the 1600s to the present, to put into context for his audience the biggest cultural property dispute the world has ever known. The lecture was presented with clarity and supported with detailed historical documentation.

Mr Comino presented details from the letters and reports of the time that showed Elgin never had the authority to remove any sculpture and how they ended up in the British Museum today, and the public- documented lies presented by the British Museum Trustees to maintain the Marbles.

Mr Comino also showed confronting visual evidence of the degraded state of the Marbles in the British Museum compared to those in Athens.

Mr Comino presented an update on the Campaign and his involvement from its beginnings and how he started the first ever committee in the world here in Australia.

Mr Comino showed pictures of how he, with the late great Melina Mercouri, began a movement of education supporting and influencing the likes of Mr Bizos, the lawyer for the Nelson Mandela and how he worked tirelessly to create committees all over the world.

Mr Comino created a movement where no one saw hope, a wave of momentum that now has so much energy that once impenetrable institutions like the British Museum are now crumbling from the weight of their lies.

The lecture left everyone uplifted and informed and wanting to do more to correct a great injustice. Mr Comino acknowledged the incredible efforts of the Campaign and the restoration work being undertaken, and exposed the lies of the British Museum that Greece does not know how to care for its cultural property.

“So good to have a voice,” one FB user commented on the live stream last night.