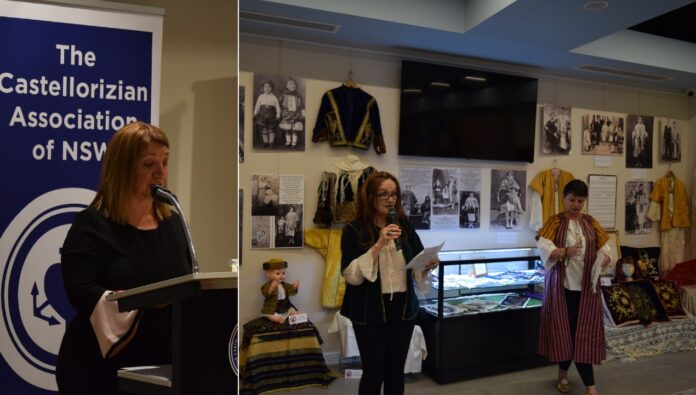 Ever wanted to know what a Castellorizian woman from the early 20th century wore on the night of her wedding?

Prior to an exhibition tour, attendees and honourable dignitaries gathered in The Castellorizian’s new function room to hear a message of thanks from the Castellorizian Association’s Secretary coordinator of History and Archives, Victoria Kazaglis Gallagher.

“The history and archives committee was re-established in 2014 by two passionate Castellorizians, Nicholas Malaxos and Tasha Vanos… within no time, I jumped aboard the history train and joined these two knowledgeable gentlemen and with no funds, but a great deal of knowledge, we began to host exhibitions in Sydney and other states,” Victoria Kazaglis Gallagher said.

Victoria also revealed how invaluable the late Anna Koutsis was in the development of not only the costume exhibition, but the whole History and Archives Committee, pushing for growth until her sad passing in February this year.

“The generosity of the Koutsis family didn’t end there. John Koutsis (husband to the late Anna) then chose to create a lasting memory for Anna by creating glass cabinets, which can be viewed tonight, and allowing us to display items of value that otherwise could not have been displayed,” Victoria said. The son of the late Anna Koutsis’ also said a brief thanks to Victoria and the Castellorizian Association of NSW for recognising Anna’s longstanding contribution.

Victoria went on to individually thank every community member who contributed to the establishment of the large exhibition now on display.

“The history of the Dodecanese, and especially that of Kastellorizo, is strongly connected to the history of Greek migration in Australia,” Giannakodimos said.

“The role of Castellorizian women in this history is of high significance, surviving difficult living conditions and meeting the needs of the household as the men were engaged in trade and shipping.”

Following the speeches, half of the attendees were taken downstairs to experience a narrative tour from two of the History and Archives Committee members.

“Ever since clothes were invented, they have been the perfect vehicle to represent society, including our place in society and the rights of passage we all go through,” one of the exhibition hosts said.

“Our exhibition, Nyfes, Kores, Gynes, showcases the phases of a girl’s journey through to womanhood.”

Guests were then introduced to Chrisofina and Evangelia, who were two young women born and raised on Megisti, and were taken through the stages of their lives through the various costumes and photos on display.

Also on display were old pieces of clothing, including shoes and jewellery, that had been handed down through generations and eventually donated to the History and Archives Committee.