Esther Anatolitis: “A range of government decisions have deprioritised our culture” 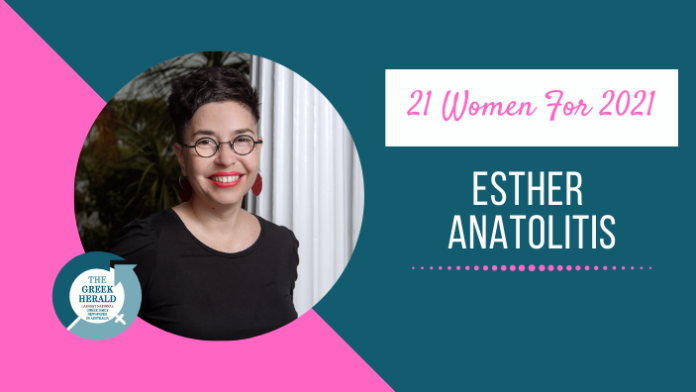 One of Australia’s leading advocates for the arts, culture and the creative industries, Esther Anatolitis is well known for her drive for change while maintaining a commitment to fostering local, regional, national and international perspectives on contemporary arts issues.

With a passion for multiculturalism, drawn by her own migration journey, the arts leader talks to The Greek Herald about her passion to create a fair and ambitious contemporary arts sector and the significance of the arts in modern society.

Anatolitis, born in Sydney in the ‘70s, is the child of Greek migrants from the Peloponnese region in Southern Greece.

In 1980, the family returned to Greece where they were planning to live permanently but ended up coming back to Australia in less than a year.

“I was only four years old then. My earliest memories are from Greece,” says Anatolitis, who has been residing in Melbourne for twenty years and visits Greece every 2-3 years to see her parents who repatriated in 2010.

With a background in the media, architecture and the arts, when asked about her passion for the creative industry, Anatolitis brings into the conversation the ethos and Greek values she carries with her into her work.

“I’ve been always motivated by a set of values -classical Greek values and very contemporary- around the public good, around the way we express ourselves, around ‘filotimo’, hospitality and the way we welcome people in our home and in our critical space,” she says.

“Running arts organisations and being an advocate for the arts has been -in an advocacy sense- about how we keep creating those environments and where we are creating our own culture rather than accepting it ready made.”

Last year was a rough one for the country’s cultural and creative sectors with experts estimating that the jobs lost will take more than five years to recover to pre-pandemic levels.

“We have all these depressing statistics from last year, that show how many jobs were lost, what the impacts where. APRA AMCOS data shows that live music has been operating at less than 4 percent of pre-COVID times,” Anatolitis says.

“A lot of artists were not able to access any kind of income support. Universities and local governments which are the biggest owners of galleries, museums and theatres were deliberately excluded from all of the income supports.

“It’s been a really disappointing thing to see through the pandemic response, that a range of government’s decisions have deprioritised our own culture.”

The importance of an artistic approach to a crisis

Asked on whether Australia would have had a more diverse approach to the COVID crisis if more artists were part of the pandemic response teams, Anatolitis has no doubt.

“Something that is frustrating in Australia is that unlike other parts of the world, we don’t tend to invite an artistic response into complex decision making.

“It’s great that after a lot of advocacy last year, there is now a creative industries body that feeds into the government headed by the Director of the Museum of Contemporary Art, Liz Ann Macgregor,” Anatolitis says stretching that “we need far more diversity of all kinds in that kind of decision making.”

“Art reminds us that we are alive. It searches our emotions; it clarifies our thinking and animates our mind”.

Referring to this year’s IWD theme “Women in Leadership: Achieving an equal future in a COVID-19 world” and sending a message to other women who are reading this interview Esther Anatolitis is bold.

“Thank you. Because by doing all the things that you do, you are all already doing -as the statistics tell us- more than people who identify as male and you are getting paid less.

“In fact, that in itself is worthy of congratulations,” she concludes.

‘I love what I do’: Meet the family behind one of SA’s iconic Fish and Chips shops