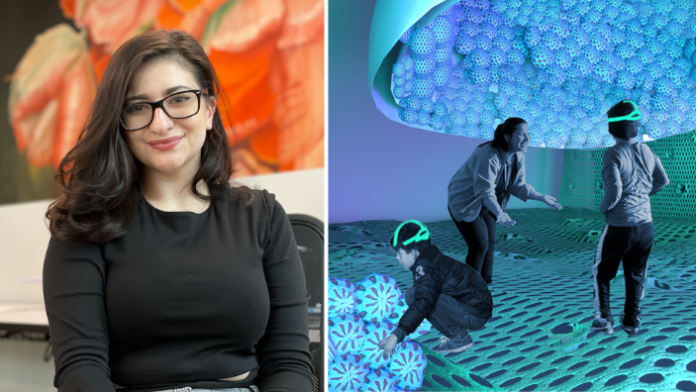 The lighting and signage used in a bustling shopping center are two aspects of interior architecture that concern Monash University student and designer Ilianna Ginnis.

This is because these facets can determine how accessible this space is for people who live with intellectual disabilities and who communicate nonverbally.

“When you see someone [with an intellectual disability] reacting negatively to an environment, it’s their version of communicating, ‘this environment isn’t for me’,” Ginnis says.

“It’s hard for someone neurotypical to understand why that individual is acting the way they are and that’s because disability awareness is still a way to go.”

“I’m trying to change the world and my younger sister is my ‘why’,” Ginnis tells the Greek Herald.

“Growing up, when I was eight years old, I had to grow up to look after her.”

NF is a set of three complex genetic conditions that cause tumors to develop on nerve cells throughout the body, including the brain, spine, and skin.

Ginnis’ developed a particular soft spot for people living with these conditions in her childhood.

“Growing up, my parents went through financial difficulty so I took a massive role in becoming her carer.”

She says they moved from Darwin to Melbourne for a “better quality of life” and the “multiculturalism”, but accessibility lacks even in the developed and highly condensed big smoke, Ginnis says.

“Whereas physical disability and accessibility is kind of already complied… When it comes to intellectual, non-verbal and cognitive [disabilities], [accessibility] is still very much neglected.”

Ginnis witnessed this lack of accessibility as Michelle’s carer first-hand.

“So I said to myself, ‘When I study interior architecture, I want to make a difference for people who are nonverbal’ because space doesn’t cater for them and their needs.”

“I’ve become so empathetic to this nonverbal communication that, to me, it’s almost a second language.”

Ginnis says she derives most of this empathy from her Greek heritage.

“Greeks are very empathetic and human-centered naturally,” she says.

“Because I can speak Greek as well, that’s also a benefit when I step in Greek homes with children with disabilities and adults who are non-verbal. When I apply that the families really appreciate it.”

She’s currently studying for her doctorate degree in philosophy at Monash. You can find more of Ginnis’ works here.