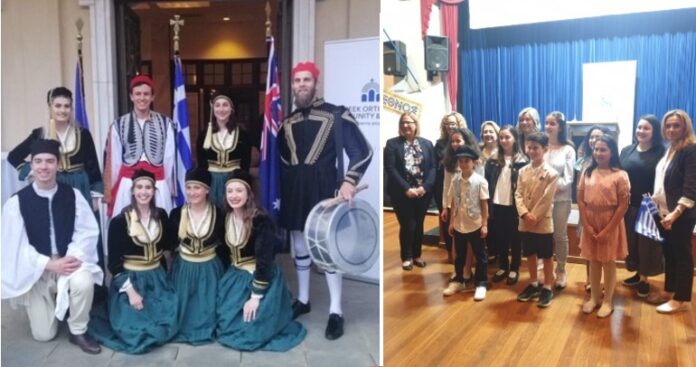 The 80th anniversary of OXI Day yesterday was commemorated with heartfelt poems and speeches by the Greek communities of Canberra, Melbourne and New South Wales.

The October 28 holiday commemorates the day in 1940 when Greece rejected an ultimatum from fascist Italy to allow Axis troops to enter the country and occupy strategic locations. The refusal marked Greece’s entry into World War II on the Allied side.

Here’s how the commemorations went down across the three states:

On Wednesday, the Greek Orthodox Community & Church of Canberra held a special ceremony at the Greek Embassy of Australia to celebrate OXI Day.

The event had a total of 220 people in attendance, running from 6-8pm in the gardens of the embassy. 25 children from the Greek School of Canberra performed songs and poems about OXI Day, followed by the Canberra Hellenic Dancers Atalanti group performing traditional Greek dances.

“We were very blessed that we got to celebrate this historic and religious event as a community, united to remember the fallen heroes of 28 October 1940, for they sacrificed their today for our tomorrow,” President of the Greek Orthodox Community & Church of Canberra, John Loukadellis, tells The Greek Herald.

The Greek Schools of the Greek Orthodox Community of Melbourne and Victoria commemorated OXI Day last night with a special Zoom event.

Many hundreds of children and parents took part in the digital commemoration, with some reciting poems, giving speeches and presentations.

All of the activities were focused on the meaning and relevance of OXI Day.

“The Zoom event was a great success. It gave all the students a chance to continue performing and honour the heroic actions of the Greeks,” President of the Community, Bill Papastergiadis, tells The Greek Herald.

Students from the Community’s Greek schools started the event with the singing of the National Anthems of Greece and Australia. This was followed by a small play, where students retold the events that occurred on OXI Day.

In attendance were the Consul General of Greece in Sydney, Mr Christos Karras, Leader of the Opposition, Jodi McKay, Member for Oatley, Mark Coure, and Member for Canterbury, Sophie Cotsis, as well as a number of representatives from Greek communities across NSW.