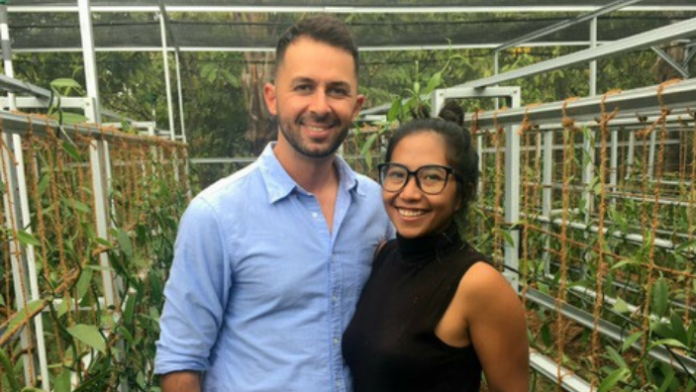 The history of Lagias Spirits stretches back so far that it begins in the era of the Ottoman Empire.

Aaron Lagias has decided to revive his great-great grandfather’s ouzo decades later at a distillery in Brunswick, Melbourne, which sources Balinese vanilla bean from his wife, Yeni’s, company.

“It just works perfectly that I get to use this amazing vanilla from my wife’s village in Bali into our Greek spirits,” he says.

“It’s a little bit of a multicultural twist.”

Lagias says he used Melbourne’s second lockdown to begin piecing together his family’s forgotten ouzo with the help of a distillery owner in Greece called John Lagias.

“…there’s not many ‘Lagais’’ around but I found one in Greece and we were chatting… his mum was involved in the original label,” he says.

“I gathered a fair bit of information on the recipe and I thought it was too good to not do something with because it doesn’t exist anymore in Greece.”

“The recipe that I’ve been using is as close to what I’ve gathered.”

He refined his product with expertise, flavour profiling and exact measurements during what he calls a “very creative period” before bottling and sending off the first batch of the ouzo in decades.

The ‘Lagias’ style of ouzo was launched in a town called Myriofito in eastern Thrace in 1773 and thrived for over a century, even after the Greece-Turkey population exchange of 1923 saw the brand relocate to Thessaloniki.

“…On the label, which I found, which goes back to the 1800s, mentions that the distillery was established in 1773,” he says.

“That’s how we know it went back that far.”

‘Lagias’ became a staple in Thessaloniki until it “disappeared” somewhere around the late 1980s, Aaron Lagais says, but his grandparents and father John left ‘Lagias’ behind when they set out for Melbourne in 1969.

“It wasn’t something that was at the front of [my dad’s] mind… [or] that he shared for many years,” Aaron says.

“When my dad came to Australia, I don’t think anyone was drinking ouzo, I think it was all VB’s [sic],” he jokes.

Aaron’s father John, now approaching his 70’s, parted the stories of Lagias ouzo onto Aaron and inspired him to revive their family’s legacy.

“My dad shared this story with me and inspired me to do it, otherwise I would have never known about the history,” Lagias says.

“Hopefully [my great-great grandfather] would taste it and think it’s amazing and a much cleaner, crisp taste as opposed to what they would have been drinking back then.”

He notes he uses traditional ingredients like nutmeg and cinnamon but fuses his ouzo with honey.

“I’ve tried to keep it really traditional,” he says.

There’s a lot more in store, including possibly exporting to European and Asian markets.

A vanilla, honey, and clove rakomelo spirit, as well as a tsipouro, is in the works.

“We’re playing around with those recipes at the moment and releasing at least one of the two in the next month,” he reveals.