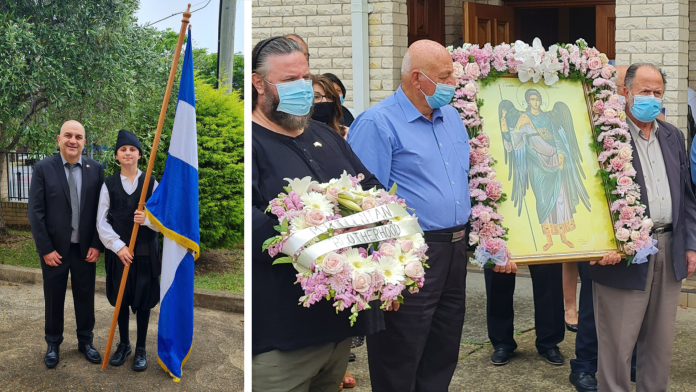 The 109th anniversary of the liberation of the Greek island of Lesvos was commemorated on Sunday with a special memorial service and wreath laying ceremony by the Mytilenian Brotherhood of Sydney and NSW.

The annual event took place at Saints Raphael, Nicholas and Irene Greek Orthodox Church in Liverpool to remember those fallen heroes who sacrificed their lives for Lesvos during the liberation.

The day began with a memorial service conducted by Parish priest, Father Asterios, and this was followed by members of the Mytilenian Brotherhood carrying an icon of the Archangel Michael around church grounds.

The icon was beautifully decorated by Georgina Kokokiris with flowers donated by her mum, Helen Kokokiris.

Later, people gathered around a cenotaph on church grounds and recited the national anthems of Greece and Australia.

The President of the Mytilenian Brotherhood, Peter Psomas, then laid a wreath to mark the anniversary and thanked everyone in attendance, including former Brotherhood Presidents and committee members, among many others.

“I think it’s an event that needs to be acknowledged. The tradition needs to be carried on. We need to acknowledge our fallen heroes and the island we come from,” Mr Psomas told The Greek Herald after the event.